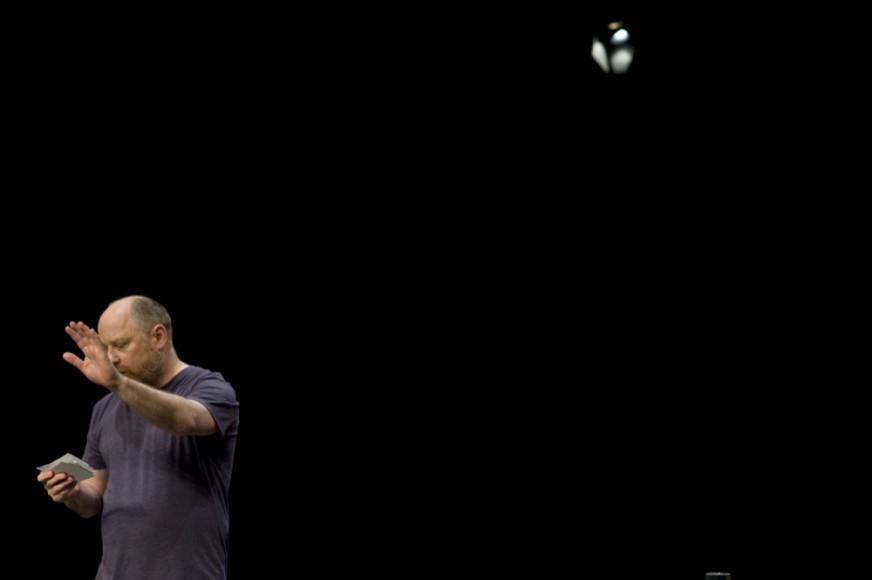 A Broadcast / Looping Pieces is a solo performance work by Tim Etchells, consisting of improvised text organised in a loose structure. It is presented in a number of different contexts, usually as an hour-long performance in theatre spaces to a seated audience.

The improvised core of the work is a live remixing by Etchells of pages from his notebook – in fact a chaotic accumulating Word file in which the artist has, for many years, gathered fragments of text, ideas, overheard conversation, cut-and-paste-excerpts from newspaper articles and web pages, writings, drafts, quotations and other notes. Selecting passages from this textual scrapbook Etchells winds, intercuts, weaves and collides language – frequently looping and repeating on individual lines, at other times editing and re-writing on the fly, creating dialogues, juxtapositions and ambiguous collisions.

Exploring archive, the process of writing and gathering, A Broadcast / Looping Pieces is an improvised window on Etchells’ approaches to text, exploring creative process, and the transformative power of performance itself.

Etchells extends his approaches to language, repetition and improvisation developed in A Broadcast through a series of more occasional and informal performances titled Work Files, each iteration of which is a new improvisation of language fragments in a gallery or other setting, typically for standing, fluid or informally constituted audiences. Each performance of Work Files has its own title, determined by the context of its presentation – for example Work Files (Zagreb) or Work Files (Vitrine).

Here is a long article by Claire Swyzen on A Broadcast/Looping Pieces, in relation to the idea of databases, also looking in detail at related works by other artists. Access to the article is free and open to all but you do need to create an account/log-in on the site in order to access it. You can also read the review of A Broadcast/Looping Pieces by Weronika Trojanska from Metropolis M which gives more information about Tim’s approach to writing and his creative process.