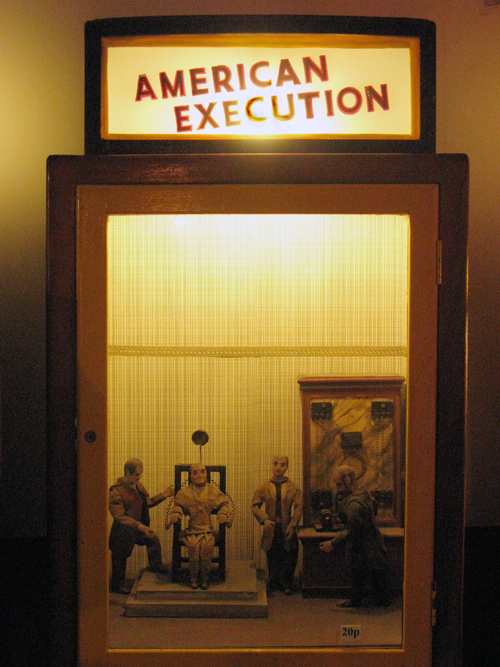 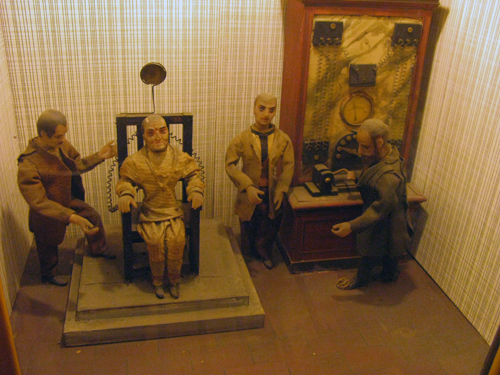 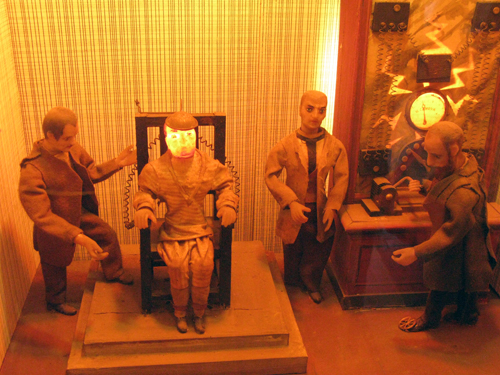 Under the bridge by the river we come across the kicked over remnants of a fire – smear of ash in the earth, debris including a broken wine bottle or two, some trash here and there. Sheltered in the curve of the bridge where it comes to meet the ground, against the damp and only mildly graffitied stone wall, there are three crudely improvised mattresses. Not placed together, but rather spread out, isolated, as if the inhabitants of these beds might share this location not socially but in spatial terms only. Something about the still-life of the scene compels – these narrative traces, trails of presence – and whilst S. and I don’t break step my eye reads the scene insistently as we pass by. The first bed comprises a single sheet of plain cardboard, perhaps one metre wide, lain on the ground and stretched towards us, a nothing of pillow for the head, imagined feet to the river. The second bed, nestled parallell to the wall of the bridge, is a small strewn pile of promotional newspapers, slightly impacted with the faintest trace of a human form. The third bed is formed from two separate cardboard sheets, overlapping and marked with the name of some product or another. These sheets are damp, perhaps even sodden, having lain here the longest perhaps, evidence of a night some while ago. The first bed though, takes my eye back to it with it’s absolute simplicity. There is only a  minimal colour difference between it’s muted cardboard and the soft earth, and with its minor traces of inhabitation (non-descript footprints around, a slight indentation at the place where one might imagine hips) it is definitely the most forlorn of these improvised beds. There is a kind of geometric sadness to its oblong – grave-like of course, though I did not think that at the time – presenting enough room for a human to lie in or on, not more, not less. Of course it goes through my mind that these home-made structures are also empty stages of a kind – spaces of absence and potential. But though I know my camera is in my bag I’m somehow reluctant to stop, take it out and make pictures of a scene like this.

Seems like I’m comfortable enough to write about what I see though.. which is puzzling at first. I wonder if it is because the intrusion or appropriation of this fragment from another’s reality is somehow less when done in words? And of course I know I can forever qualify here, with words. Or is it because I don’t trust a photograph for this, with all the camera’s qualities of capture and its relentless aestheticisation? (Or with all the photographs’ claim to truth?).  Perhaps it’s just because I think I can move more nimbly what I am looking at, and the fact of my looking, rather better in words? Words is my place perhaps, more than pictures, and i feel comfortable to negotiate there. Perhaps Hugo would know how to take a picture here? Or perhaps he would also balk at the invasion. Funny. When I filmed my friend K.B. for a video a good few years back, Hugo, watching the footage and taking pity on K’s severe and extended stress in front of the camera, told me that he would have stopped the camera! But then performance is my place also and I’m inured to watching people go further than they had expected to go, revealing themselves. I guess I’m a known vampire of that. 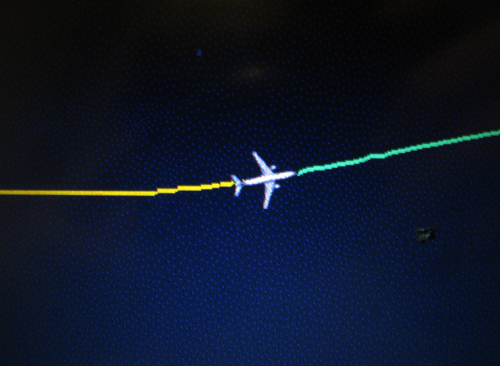 Reviews of The Broken World are starting to appear. The best so far is from Stuart Kelly writing in Scotland on Sunday:

“..an exhilarating and poignant tale of love, loss and computer games that ought to make the leap from “cult classic” to “popular success”… The Broken World is ultimately a humane and heartfelt book, with a proper emotional core wrapped up in a giddying fantasia. It manages to be desperately sad and desperately funny at the same time. It is a book of big ideas, cunningly delivered through a slacker’s shrug.”

So-so from the TLS, but it’s not online. An interesting, positive one from Matt Thorn writing in the July edition of the Literary Review, also not online.

Great blog responses so far from Big Dumb Object, and from Marcus Gipps.

I’ve also been doing some online interviews about the book. Here you can see the one from Metro which is also something of a review/feature, and the one for Big Dumb Object. 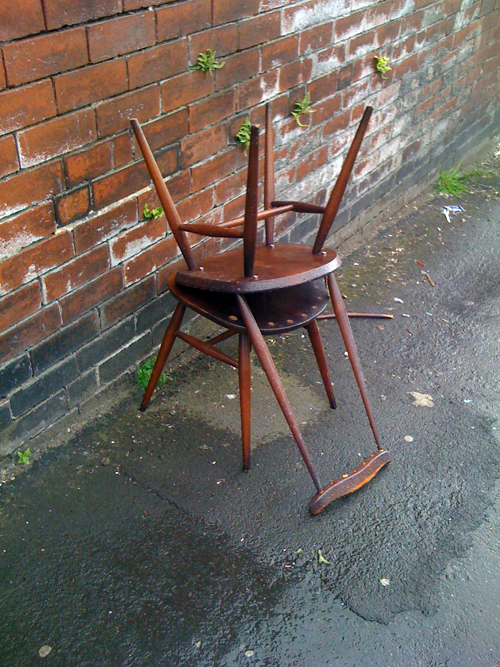 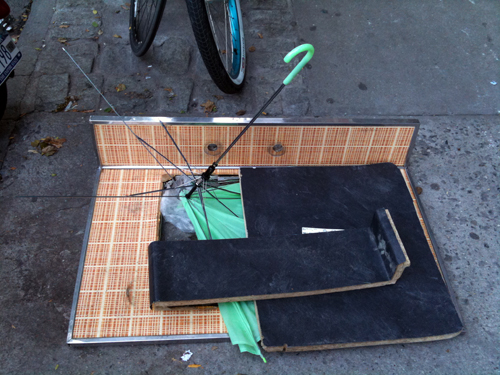 My friend Tomoyuki in Tokyo mailed me after he’d been watching the monologue Sight is the Sense… which i made with the American actor Jim Fletcher.

The piece… reminded me of what Imre Kertész said in his Fateless about the linearity of the order of things that happen. He says the fact that things happened one by one during his Auschwitz experience saved him.  He would have been destroyed if all the things happened at once.  What if all the definitions in Sight is the Sense… came to me at once?  Then it would be a very dangerous piece, but doesn’t the linearity of the monologue somehow save me at the same time?

Tomoyuki underlines the linearity of the piece (the text for which consists of many many many disconnected single sentences one after the other), and to the way that all performance in fact unfolds in this way over and through time, building and accumulating, but at the same time systematically forgetting and undoing itself. The lived event (performance in life) is always slipping away. Its accumulations (such as they might be in short-term memory, or in the build up marks/detritus in a space, or in their impact on a body) are inevitably only partial and incomplete traces of its present moments and their sequential impact. (Strange parallel process of both both building/accumulating and slipping/disappearing).

You can see the work live in Paris later this month, at Theatre de la Bastille who are also showing the more recent solo in pieces I made with the Japanese dancer Fumiyo Ikeda.

A cruel boss, it was rumoured that he punished people who were late to meetings with him by making them eat their watches. Common were the complaints of the local doctors called to the bedside of men who were trying with some difficulty to pass the indigestible remains of a large Rolex or whose throats were ravaged by the fragments of a crushed diamond encrusted, four time-zone Seiko.

I've been thinking a lot, she says, then adds, well, i should be careful of the word. It's not so much that I have thoughts these days – I am invaded by them.

Out front of the gas station, as other cars come and go, a very large guy is inspecting the underside of the very very large jeep/four-wheel drive which he evidently drives, peering under it methodically as he walks around it, a baseball bat clutched ready in one very large hand.

The city has no pens, cages or shelters in which it gathers stray or abandoned animals. Instead it pursues a policy of catching, vaccinating, neutering and tagging the many such creatures to be found there before then returning them to a life on the street. Poster campaigns from time to time remind the city’s inhabitants to feed or give water to these animals, specially as the summer temperatures rise. This now-established shadow population constantly performs a set of subtle but extraordinary demands and gestures in relation to the urban space. The streets are full of them – dogs with their own corners, shop doorways, park benches and traffic intersections, cats in the bushes, running along walls, sleeping on the boxes of books outside a second hand bookshop, or under the tables in a restaurant, or peering from rooftops here and there. In many cases these animals have particular sets of people providing sustenance for them in specific locations – impromptu homes with dishes for water and food, a scrap of clothing for a blanket even, to sleep on. And all this has a strange effect on the public space of the city, populating it with animals that lack either the status or the indignity of ‘ownership’, existing as they do in a physical and social space that’s at the same time highly public and yet which becomes, by sheer dint of their custom, domestic. The ubiquitous presence of these animals also thrusts a strange collective responsibility on the city’s inhabitants, tying them in a collaborative project of nurturing whose rules and roles are uncertain. At the very least, the population are required to negotiate (with care, indifference or cruelty) the spatial needs of these animals as they lie on streetcorners, sit beneath restaurant tables or hang out beside playgrounds, scavenging what they can. All cities have wildlife of course.. a layer of the natural in the urban, but these animals are sanctioned semi-citizens – loping their way through the crowds, or laying with apparent indifference at the busiest of markets or shopping streets.

Small news. I’m going to be writing a fortnightly column/diary for Guardian on-line imaginatively titled ‘Tim Etchells on performance’. I hope that writing on or around performance there will leave me free to meander here. See above.