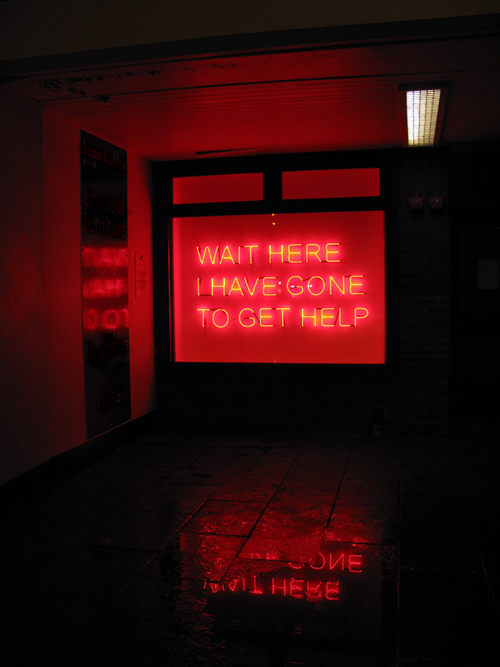 Finally got round to producing postcards featuring some of my neons and other work. You can buy them – a set of 8 – via the Forced Entertainment website.

” ..advertised in local newspapers and with flyers which promised: “Lapland New Forest where dreams really do come true. Lapland has come  to Dorset”… Visitors were offered a winter wonderland with snow-covered log cabins, a nativity scene, husky dogs, polar bears and other animals, as well as a  bustling Christmas market. But instead of the promised magical festive treat, they experienced fairy lights hung from trees and a broken ice rink… The “bustling Christmas market” merely comprised two food stalls selling German sausages and a choice of turkey or pork baguettes (with stuffing).”

Not much fun for the victims but this story has to be one of the best things I’ve read for ages. It’s so close to my continuing 2011 project updated daily over at Vacuum Days, and so close to the kinds of things I wrote about in Endland Stories. Amazing that the guys involved made more than £1m on advance ticket sales. Full article here.

Looking forward to doing this event with Tony in London next month. It’s free but booking, as they say, is essential.

In a new text-performance for the National Portrait Gallery Tim Etchells builds and dissolves stories, worlds and pictures in language, working with rules, games and strategies unfolding at the edge of narrative coherence. Etchells draws on text material from catalogue essays and critical responses to works in the collection whilst also invoking the more familiar landscapes from his work through dystopian urban adventures, science fiction and distorted fairytales. The performance will be followed by a contribution by Tony White, the author of novels including Foxy-T (Faber and Faber), described by writer Toby Litt as, ‘one of the best London novels you’ll ever get to read.’ For Dirty Literature, White will read from works of fiction that respond to the National Portrait Gallery’s location, as well as his satirical 1999 novel about an alienated police force who seem locked in to a cycle of violence and prurient self-justification: Charlieunclenorfolktango.