Accounts of this undercover operation and the related convictions this week were the by-now usual mix of outward-bound bonding exercises for wanna-be terrorists in Hampshire, combat skills and camaraderie honed during cut-price Paintball long-weekends. The last part of the article though, about the initial arrests, came over especially cryptic, blunt and vivid.

Surveillance transcripts recorded the moment when armed officers raided the private dining room shortly before midnight on August 31 2006, shouting: “Sit down. Hands on the table, please. Everything will be explained to you.”

Seemed like the kind of moment that conspiracy theorists or zen monks might dream of – when the secret/reality police burst into the room at random and explain everything.

Meanwhile a friend in the midst of emotional dramas wrote:

i couldn’t do anything yesterday except wait for him to arrive. i didn’t know that a person can just sit there and wait for hours. just watch the clock. creepy

Tim
21:57
i guess i thought he was dead for the 'reason' that people in the world start to think that certain celebrities are or are not alive or dead…
there is not realy a 'why' that I can think of

what i don't get is that he is texting her from a combat situation and she doesn't reply to his texts. i mean if he was my boyfriend I would be glued to the computer. I'm not bothered really cos the important thing is that she cares for him. I would say something but i guess it is just her nature, to be like that.

And another, also via Vlatka, this from the ageing philosophical Georgian classical pianist/taxi-driver (think Soviet rather than Deep South) that took her out to JFK last week. Stuck in traffic, at the end of a long monologue, describing the trials/tribulations of his family, immigration/exile and poverty economic situation, the whole thing punctuated by bursts of his daughter playing piano on a tape in the in-car stereo ("how i play is nothing she has fingers like rubber.. they would not let her come here to join me, she is a separate person they say") he confides in her:

Mark sent it, because it reminded him of Vlatka’s work.

Something quite Philip K. Dick about this story, with its promise of replacement pets cloned from the tissues of loved-but-lost animals.

Meanwhile, in a beautiful project for Art Sheffield Roman Ondak covered the floor of the city’s Winter Gardens with autumn leaves, confusing first by virtue of switching the seasons and second because  the Winter Gardens is all ever-green trees. The first thing that hit me walking through the space yesterday was the smell. Something deep, earthy, walking-in-the-woods – in any case a far cry from anything you’d expect in there. At the opening lots of people venture stories about reactions to the leaves. Adults don’t notice them so much one person says, it’s more the kids that engage with them, as if the adults don’t have time. It’s true that during the opening event speeches there are a few kids scooping handfuls of the leaves and chasing each other. Someone else describes how one particular shop/coffee stand owner in the Gardens was sweeping away the leaves in a neat circle around her space. It’s good I think, says Roman, she becomes my performer.

Working hard now on the last stages of the pieces for ART SHEFFIELD 08: Yes, No & Other Options. The opening is Friday and the show runs from 16 February – 30 March 2008 in venues across the city including Bloc, End Gallery,  S1 Artspace, Site Gallery, Yorkshire ArtSpace, Sylvester Space, The Winter Garden and the Millennium Galleries where my stuff will be. I’m showing three new neon pieces alongside two works made with Vlatka – our existing video Insults & Praises (2003) and what began as a kind of mutant follow-up to it titled Threats & Promises. Sneak preview of one of the neons below, meanwhile late night video shooting to complete the Threats & Promises piece got abandoned sometime around midnight tonight when all the lights in the studio tripped out. Desultory end to the long work day which was just starting to clarify (and not before time!). Will help make tomorrow nice and pressurised.

Press release goes like this: “Taking as its foundation a specially commissioned text by art critic Jan Verwoert, this city-wide exhibition addresses the fact that in a post-industrial condition… we have entered into a service culture where we no longer just work, we perform in a perpetual mode of ‘I Can’. (Even advertising tells us that ‘Life gets more exciting when you say yes’).Verwoert asks, “What would it mean to put up resistance against a social order in which high performance and performance-related evaluation has become a growing demand, if not a norm? What would it mean to resist the need to perform?” He suggests that certain means of resisting are in themselves creative – that as well as embracing exuberant performativity, art has also used the ‘ I Can’t’, by creating moments where the flow of action is interrupted, established meanings are suspended and alternative ways to act become imaginable. He suggests that as well as yes and no, there may be other options.” 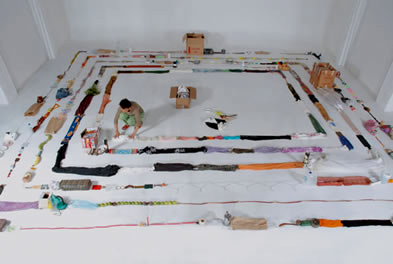 Strange thing about the early slot in the huge city pool is that they seem to test the fire alarms at a set time each day, when there's not so many customers around. So as you make your way through the water in the great emptiness of the competition pool, not quite yet awake, you often get this voice booming from the PA:

Then a short pause, and the fire alarm itself comes on as promised, which in this case is just a short bell sound followed by another announcement:

There is an emergency. Would all staff and customers please exit the building by the nearest possible route. Please evacuate the building.

I've liked starting the day with this strange contradiction, living between the denial and the assertion of an emergency.

Later at the cafe down the road to get coffee, three days running I came in through the door to find the same song greeted me – 10cc's 1975 art pop I'm Not In Love. It wasn't the childhood song or the words I thought about so much, as the fact that my routine was colliding me with yet another sonic repetition. I had to imagine the cafe owner coming in at the same time each day, switching stuff on and hitting play on the only compilation CD, the same tracks playing through over an hour or so before 10cc came around with its pre-sampler loops and whispering voices, just in time for me to come in through the door.

Emailing a little with Christine Tomeh about participating in Home Works: A Forum on Cultural Practices, a festival involving performance, video, installation etc., the next edition of which which takes place in Beirut this April. I loved this description she sent:

The first edition of the Home Works Forum opened in early April 2002, coincided with the outbreak of the Second Intifada in Palestine, the second edition opened in late October of 2003, after a six-months delay due to regional upheavals caused by the US invasion of Iraq, the third edition was due to take place in mid-November 2005, again after a 6-months delay due to the assassination of former Lebanese prime minister Rafiq Hariri in February 2005. At this point the Home Works Forum has (we think) settled into a regular schedule of regular disruptions. This unpredictable dynamic has become a rhythm, a paradoxical routine. Because the practical and political circumstances around our work are always breaking and shifting relevant questions about dislocation and disruption have imposed themselves repeatedly.

Two days after No Country For Old Men I’m still in an enjoyable shock about how casually at a certain point it throws away one particular narrative tension, and how much (very cruel) fun it has at the viewer’s expense in denying access to a certain scene. (If you’ve seen the movie you’ll know what I’m talking about – if not, I’m not spoiling the surprise). In a not-unrelated conversation just after the film M. asked “Oh yes. What did happen to the money in the end? Who got it?” Took us most of the ride home to remember/figure it out, and even then we weren’t totally sure. I loved this sense of certain things (characters, plotlines, events) moving slightly in and out of focus as the film went on. Loved also the film’s mini-theme of very badly wounded guys buying clothes off of strangers for disguise, bandage or tourniquet purposes.