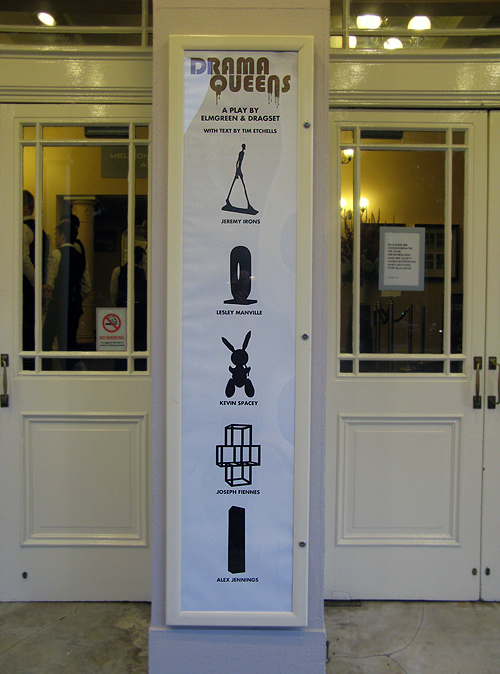 In any case I claim as my work this week the choreography of all the drunks in Brussels. The backwards and forwards staggering of the guy at the ATM, with its interlaced measure of side-to-side swaying, the guys head leading his body in confusion, his whole frame suspended from time to time in moments of temporary balance and bewildered thought, was pretty much the start of the show. Later, when his money spat from out of the machine, he let it fall, stupid fingers bluntly grabbing as the notes scattered flightless to the pavement  – the green brown of brand new 100/50 Euro notes heading downward to their place at his feet. His comical grasping, blind, flat palmed, was my work, and the trick of the other guy, his friend, with a darting less-drunk motion coming in to help him, crouching and grabbing the fluttering cash was a maybe too clever way to turn a solo into a duet, the two of them gathering notes in hurry that was frightened by the prospect of wind. The way they circled the pavement to the waiting taxi was mine, the more-sober one going round, out and into the road to take the left-hand passenger door after first flinging the other wide open for his friend, who, after collapsing inwards to the darkness of the seat, made great and protracted drama from the action needed to close the door after himself – faint circles of the  hand, conflicted leaning in tension with the seat belt and then finally the gesture of his fingers, straining for the handle, a miniature ballet staged one full half metre short of their mark.

The climax of my work was maybe days later when a different drunk altogether, a veritable Nureyev or Nijinsky of his time, crashed down the stairs of a restaurant, head over heels and then wedged in the curve of the stairs turn, unable to right himself, in unwinding agony of an overturned beetle, legs in slow motion, animal groans. His friend also joined for the duet, the latter trying to right the former, by pulling him upwards, all the while threatening to fall and join him in the almost and painful horizontal. Their exit was the piece de resistance – the drunkest of the two clasping his hands around the neck/shoulders of the other who took him, weaving an unsteady path between the tables, his friend a good natured more-or-less-sentient sack of potatoes at his back declaring good! good ! good!, as they lurched closer to the door then found release to the darkness of the night beyond.

The work I am proudest of though, was my trio for a drunk man, a half empty beer can and a brand new Mercedes Benz taxi. Staged at 1 or two in the morning the lone dancer – in white track suit, sideways baseball cap and rolling stagger – drop-kicked the beer can from his hand and out into the floodlit street, the can moving in a wild unruly arc, towards the parked up taxi, but over it, a beautiful clearance which non-the-less dripped and dashed a curve of lager to its gleaming bonnet and windshield, incurring the wrath of the driver but stunning the crowd with its thrilling, abrupt and unexpected parabola. In the aftermath the dancer almost collapsed, fell back on himself with the recoil, so beautiful.

The rest of my work – all the swaying, blundering of the city's many drunks dispersed across its vast stage, all the missed footsteps, the fumblings, the falls, the yells, extended arms, slumped backs, entangled pas de deuxs, the gyrations, twists, circlings, stumbles and misunderstandings, the sudden motions, the unison chorus of staggerers, subway platform soloists of confusion, argumentative quartets around benches  etc etc I will not recount or describe in full detail here but hope that you have seen them, and appreciate the work. Something about a venture on this scale is suiting me. I will move, in the not too distant future to larger things – the rise and fall of the money markets beckons and I have let the relevant authorities know that I am ready for the job.

Spent some days working with Fumiyo on the piece we do for next year. Early conversations still. Some nice things in the studio. On the floor of the space we were working in at Rosas many coloured dots and lines of tape, red, blue, yellow, green – the dots  like oversize confetti, diagram-ghosts, marking points for the geometry that backbones so much of Anne Teresa’s choreography. The week before (in London) I watched the Reich evening, in which the standout work was Phase, to Reich’s Piano Phase. I loved it, in its tension, and apparent singularity – the dance like the music a simple-but-complex, complex-but-simple braid of repetition and doubling. Stunning. Ant Hampton has been blogging some lately which I’m glad of – he wrote nice things about the performance here.

Really noticing these days how much I watch hands in movement – was momentarily  obssessing over what I saw as a difference between the hands of the two dancers in this work (not visible in the grainy YouTube clip of course!). Watching Fumiyo in the studio too it’s certainly her hands and her face that I seem drawn to as she moves – maybe not so much that these are what I see more, but rather that they are what i can frame a comment on or through – as if these more easily narrative parts of the body (?) allow me a language with which to start speaking. I’m not sure. Sara Jansen watches the rehearsals too and at some point commented on what F. was doing with her feet. I’m suddenly reminded that whilst I must have seen how she moved them, and certainly felt it, I can’t even start, for the moment, to describe or speak of it. It’s either not in my memory, or where it is, I don’t have the words with which to extract it.

New York based theatre academic Jonathan Kalb did an interview with me a while back, then came to Portland to see Quizoola! and Sight is the Sense… His generous and smart response to the work can be seen online.

Two guys in the Japanese restaurant, both in business suits, one railing the other with rhetorical questions to help him make his point.

In a bar two days later (think morning sunlight and filthy windows) the interactions are even less readable. Speaking languages you cant start to guess the meaning of, with a surfeit of gestures  that somehow remain opaque the guy in the Everlast sweatshirt confronts the woman drying glasses at the counter. If it’s a friendly conversation or not, you cannot tell. At some point in the undubbed movie he proffers a photograph – visible from where you are sitting – the face of a child. Bar-woman looks blank, goes back to her labour. The picture is his daughter, the presentation of it a simple uncalled for intimacy? Or the child is missing, a trail he follows with detective incompetence, a rudderless ship? You can’t know. Will never know. Leaving, the guy grins with cigarette in teeth, but his eyes are still probing the clientele, still looking for something, then he’s gone.

Final cast for Drama Queens at the Old Vic tomorrow (Sunday 12th at 7.30) was announced a few days ago – remember you can get all the old news here first. Joseph Fiennes, Jeremy Irons, Alex Jennings, and Lesley Manville join Kevin Spacey in the project of Michael and Ingar (Elmgreen and Dragset) with a text by me. 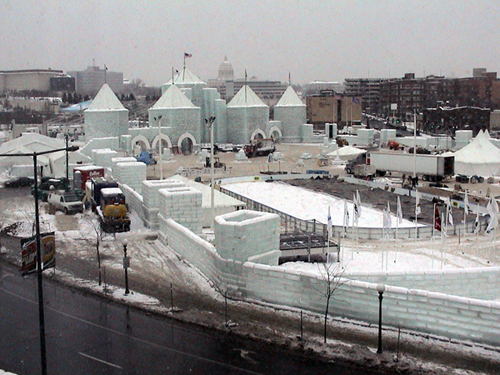 a throng of people near a stadium (occasion unknown)

9.11 re-enactors in their outfits and ‘masks of shock’, bags of pre-bought ashes and faked up office document-detritus in their pockets and shoulder bags ready to throw skywards when the cardboard planes strike the replica towers. Kids look on, bored, restless. They saw it all before before. A band strikes up – that song they played on Titanic but hacked up in some generative/interactive/download-only remix by Protocol9 or HawkerSiddley.

A sturdy guy but somehow unstable there’s some kind of random ungainly thing going on in him. Under the surface (or more like ‘all over it’) you check curious shifts of weight, dips in gait, semi-lunges, hidden twitches, the whole of this, a rough equilibrium, somehow contained in the general direction of his motion, deliberate moves mixed and matched with unpredictable impulses, the combination threaded round the axis of his spine, the bloke always steadfast and balanced somehow, moving forwards but rolling, only his facial expression letting slip, from time to time, his own surprise, by startled eyes, at the movements he makes, riding the frame of himself.

Or on the street in London:

First thing I saw this morning when I looked out of the window was [inaudible]. I thought oh yeah, this is England. The sunny days are over.

Ant sent this yesterday, vaguely re The Broken World, which he’d just finished reading, but also somewhat in line with the apocalyptic markets meltdown we’ve had crashing around our media eyes and ears these last few days. I hadn’t come across Don Patterson before – I liked this quite a lot and I’m about to start looking for more.

The Scale of Intensity / by Don Patterson. 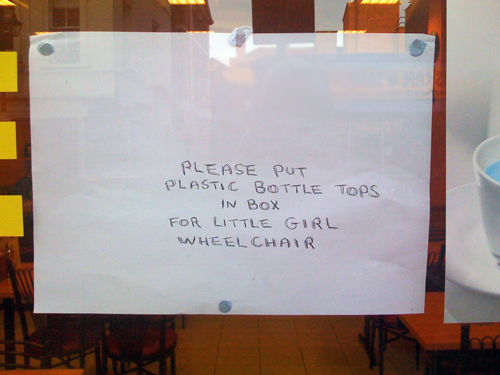 A while back I wrote a short text for Arne Fork whose project with Co>Labs/Travel Light – Not The Right Kind of Light For a Magic Act – opens 2,3,4 October at WUK in Vienna. The process of the piece began from open invites to a group of writers who were given cart blanche in responding to the theme of disappearance, with the extraordinary story of artist Jan Bas Adder as a further reference point. No idea what twists and turns the process of the project has taken thus far, or if my narrative below will be in it or if it simply hovers somehow as deep background. Certainly though I’ve ended up donating the title, which comes from a line in my text.  Here’s what I wrote.

Guardian piece on the forthcoming Baader-Meinhoff movie quotes Jan Schulz-Ojala’s accusations about it in Der Tagesspiegel – that the film’s producers are operating as a “history waste management machine”. Loved this line from Schulz-Ojala: “They’re taking the radiation waste of the nation and burying it in the dumping ground of moving pictures.” In a cynical moment you could take that for a description of a much broader and widespread cultural/political process.

Some while back I contributed to a publication project Fools In Print edited by Lucy Keany, and including work by a whole bunch of other artists such as Ryan Gander, Matt Keegan, Graham Parker, Hayley Newman etc as well as the lovely Vlatka Horvat. Themed around “the virtuoso, ad-lib, timing, humour, one-man shows, dancing strategies, desperation, wannabes, Live Art, music and new technologies, audience, [and] glitches”.

Over at Ambiente Hotel Mike Harrison has been on a powerful jag lately of posting rather beautiful and harsh fragments – dense little kernels of narrative and atmosphere that may never need to be expanded, perfect as they are in this boiled and tangled form. Check out the narrative fragments here and here, the imaginary reviews here and here, and my favourite – a kind of prose poem that eats itself – here.