I’ve been working on a project in collaboration with the artists Michael Elmgreen and Ingar Dragset. It’s called Drama Queens and will be shown in Skulptur Projekte Münster 07 next weekend. Performances are on 16th June at 17:00, 19:00 and 21:00 in the Münster City Theatre.

Michael and Ingar proposed to make a performance without actors, in which a group of famous Twentieth Century sculptures hang out on stage and chat (via performers on voiceover) – making some small talk, boasting about their respective places in art history and bickering about their possible worth at auction. They invited me to write the text which by now is finalised and recorded.

As we’ve worked on it the piece has developed into a preposterous object-drama in which (amongst other things) Jeff Koons’ Rabbit falls out with Giacometti’s Walking Man, Hans Arp’s Cloud Shepherd falls in love with Barbara Hepworth’s Elegy III, and the whole scene is observed with conceptualist wit from Sol Lewitt’s Four Cubes and with outspoken rage from Ulrich Rukreim’s Untitled (Granite). There’s a great sense of fun in the piece but at heart it’s pretty sad too. Maybe there’s always something melancholic about objects that start to talk.

Initially E&D planned that stage-hands dressed in black would shunt the sculptures around the stage as they talked but in the final event the sculptures (slightly larger than life, and replicas of course) will be motorised and radio controlled from the wings.

A couple of weeks ago when we were in Berlin the kids and I went out to took a look at the guys amazing new studio (an old pumping station that’s very much under-reconstruction) and at the sculptures for Drama Queens lying prone, or  bubble-wrapped and awaiting electrification.  I think the performance is going to be pretty interesting. 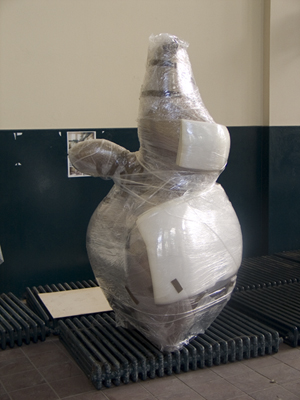 Rabbit: They said I was a nothing, an empty gesture, a superficial if kind of clever decoration. Others said that I embodied a devastating critique of the economy of the superficial. They said that from the tips of my ears to the ends of my feet I was a dazzling attack on a whole culture’s obsession with wealth, glitz and easy pleasures. Still others thought that I was genuinely charming, that I showed a real and honest sense of fun – a kind of joy without irony that has all but vanished from the world.

Elegy III: And, what’s your own opinion?

Rabbit: I am a silver rabbit, based on the form of a cheap but colorful plastic toy and I am approximately 104cm high. I just reflect reality on my beautiful skin. That’s all there is to it girl. What kind of opinion do you expect me to have about those big questions about symbols and meaning?