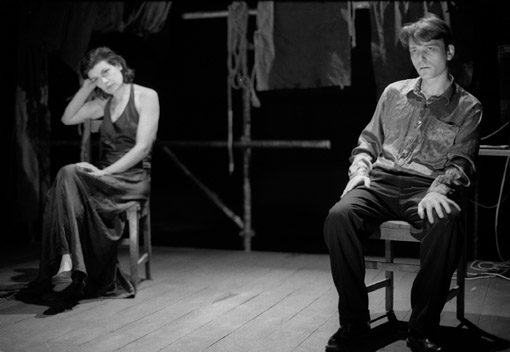 What was most strange perhaps, watching Dirty Work again last night, nine years since we first performed it in England, was that it almost felt easy – or at least *not difficult* – in the way that the culture changes around things over the years, making them possible, or thinkable somehow. Back in 1998 it seemed like a big ask (or even a provocation or an affront) from us that an audience would just listen to a performance that consists of talking for an hour; that a piece would so self-consciously refuse to have any action, that it would instead conjure action virtually, through language alone. Watching the piece now that all seemed perfectly OK, a possibility everyone in the room could admit to, a fact that left the piece quite free to simply get on and do what it wanted and needed to do. It went really well.

I was shocked by how *material* some of the text seems. How much really like an event in the room it can be when Cathy says, for example, describing one scene in the ‘imaginary performance’ which the whole piece comprises:

“The dissection of the corpses begins,
in an atmosphere of unease.
Cuts are made from adams apple to abdomen,the skin is peeled back and clamped…”

Another strange thing is how short the piece feels! Just (almost) an hour in fact. These days we’d make it twice the length I’m sure… And with that there’d come a whole new difficulty!

One more performance in Toynbee tonight (6 June) and then we move on to the other piece First Night. See this previous post for all the details on place, dates and times.

The photo above is by Hugo Glendinning.