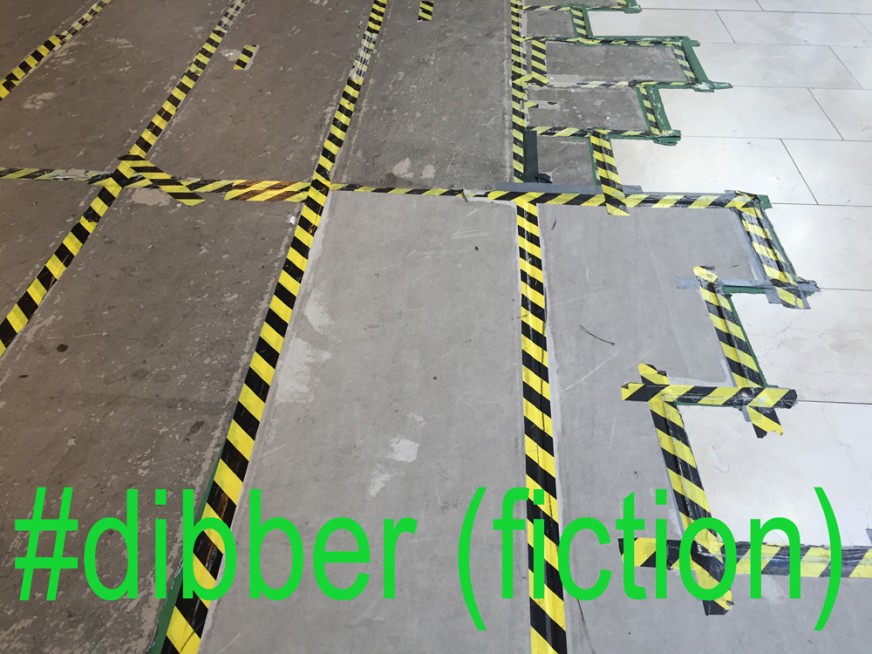 Dibber got a letter from Celebutards demanding him for Induction next Thursday or face big problems with Benefits large and small. After customary complaints, idle moaning and/or delayed commiserations from immediate family, he got his conscripted ass down there early – sitting in the waiting lounge with polystyrene ceiling muzak, litter of aged magazines and a flat-screen receptionist for 48 hours, tuning to the strange comings and insidious goings of the building, the specific creak and crackle of its cctv, pesticide, aircon and the buzz, clunk clatter of the Pepsi Machine, Juicer and alleged water cooler.

When it came to induction the advisor bloke sat him down in the windowless cubicle, offered pain killers and Detox Cigarettes then ran thru the spiel – everything was embargoed, nothing they said could go out of the room. The plan was a year long conscription, with option on two further years, dependant on ratings, socials and a whole lot of other stuff like pre-recognitions, cross-sells and co-convergence that a straight A’s idiot like Dibber couldn’t claim to understand. They took his fingerprints, appointed him a designated Driver, outlined a programme of corrective dental work, filled his face full of Botox, ringed his flabby arms with a Celtic looking tattoo, sprayed him with OrangeTan, did something weird to his hair and sketched out the next six months in partial detail while the wardrobe people took his measurements with a laser-device. Later they took him down to Administration, converted his name to a hashtag, signed the papers and let the wagons roll. #Dibber was cast as a Drunken Oaf type with something of a Prince Charming thing, a well-meaning caricature whose looks would slowly melt butter but whose mouth would quickly shoot blanks. They had him down for a romance with Helena Bellend, then a bust-up that would hopefully rock Twittersphere, he’d get in a punchup with Mario Mixface, apologise, flare up on PintRest and apologise again repeatedly then shack up with a new older celebutard called Martha Martha that they were launching the same time as #Dibber. The idea was to cross-fertilise followings, routing trickle down audience from Bellend and Mixface to launch the new stablemates, and at the same time add spice to the existing properties who were losing their peak in some key market segments. #Dibber was pretty much lost at the first plot twist, his boner for Bellend quickly diminished by the prospect of later enforced carnal endorsement with Martha, whose haggard Real Face was only partly hidden by the layers of make-up and pioneering surgery already enacted upon it at Celebutards clinic. Some of the surgeons there were practically cubists – hardcore ex-military nut jobs straight out of Texas, Iraq and Afghanistan and working at the absolute ethical cutting edge of what could be reconstituted using a human face after carbomb injuries.

#Dibber got through the year OK, appearing in public here, there and absolutely anywhere, always surrounded by paps, prats and photodrones, rolling deep and loud with a gang/gaggle of other celebutards of variant types and persuasions; it was 365 of 24/7, opening Night Supermarkets, clutching swag, closing down Hookah Bars, singing at a Charity Gala for Refugees from America, brawling in Shoreditch and Dolphin Square, breaking up with Bellend after a viral fight in Frank Bruno’s Restaurant, then licking his wounds and the aging surgically-restored pussy of Martha in a sex tape that absolutely no one wanted to pay for but everyone wanted to see. At the end of all the rollercoaster he was addicted and exhausted, a recognisable face and certainly a brand of some kind, but the writers at Celebutard had no further use for him and they dumped him back, without warning or therapy, into Unscripted Reality, just a handful of catch phrases left to his name.

Down there, in the lower depths, ‘on the other side’ as they called it almost euphemistically, he met a few other former also-rans, blurred forgotten shapes clinging on at the edges of the scene like Candy and Molotic, then moved to Margate and then later to Hastings, got a job as a DJ in a defrocked revamped hotel disco, doing short slots on the decks at alternate weekends and running drinking games with the crowds at consecutive midnights, maintaining the drains, the foam machine and the smoke machines in his spare time. His eyes, if you looked in them were dead. He was just a shameful echo of himself he said, technically alive but in any commercial sense a wreck-job, some fucked brand, a Woolworth’s, beyond reinvention.

Three or four years he lived that way, no one was counting. #Dibber tried – he kicked the drugs they’d addicted him to, got back together with his previous wife from his previous life, had a kid with one of the girls that worked the candid lightshow in the hotel disco. He got fatter, sadder. Made up with his parents but nobody cared. #Dibber lay fallow. He kept the hashtag but wouldn’t even glance at it. He stayed out of Old Bill Londons, stayed out of The Arm Bar and stayed out of NonDom Pete’s. He wouldn’t show anyone the hologram of him punching Mixface anymore, he wouldn’t talk up his latterday social stats, wouldn’t even mouth the words to his best known catchphrase if it came up anywhere. At night he missed the sound of the photodrones and in the morning after the night before, he missed the ritual reconstruction and routine re-assembly of his drink-erased antics spread out all over instagram and vine.

The years passed. Texas came back on-grid. Putin was inevitably executed. The pubs offered nightly re-enactment of Cameron’s pig fucking youth. Even ISIS mellowed a bit, became a bit more chill. Things changed. And in a way nothing changed.

And with the turning of the earth, after an indecent interval, someone from another Channel (probly more edgy, really more now) came down the club and sought out small chat with #Dibber as he cleaned behind the bar. #Dibber said yes of course and before he knew it he was signed sealed and indentured to some weird comeback show in which a shitload of former reality stars were being flown up as payload to an almost derelict Russian space station (SkyLub) to see how long they’d survive. If #Dibber had had a qualified lawyer or a competent agent or a semi-supportive family member, friend or even casual acquaintance of no fixed gender or abode they would have advised him strongly not to take the gig, but he had no such thing in any such category and he accepted it, with open arms. A route back. Another beginning.

The training camp section of the new SkyLub scripted reality won awards in Macau and Ukraine. #Dibber was a hit within a certain demographic. He had good timing for gifs, decent body contact, fair presence, a lot of it convergent. He had catchphrases too, a few of the old ones were worth something still and he soon had new ones from the Anti-Gravity episode and a kind of joke contest skit/spat with Karen Splita. The episode on the day before the Launchpad Special, where he was reunited with Bellend (almost unrecognisable under the layers of her new surgery and non-prescription animal tranquilisers) got good ratings. His perilous space walk in a largely exaggerated meteor storm was an absolute sensation.

Things looked good for a #Dibber revival on his return to Earth but either the physics or the focus groups, or the wonky pre-fall-of-the-Soviet-Union-space-tech took their own routes towards closure, no one could be sure. Some people said that most likely the reality writers just decided to cut their losses and go for broke and instant ratings, bringing on a slow leak out of the oxygen of publicity and a final crash to earth for the wreckage of the burning SkyLub. There would be no survivors, the scripters and the mission tech were all agreed on that much at least.

Reviewing his best bits before the inevitable burn up demise #Dibber was filmed in the long abandoned gym of the space station, trying to do sit ups in Zero G, ending up flipping and flopping all over the capsule and laughing. For a moment, even with the low-res footage and the sound-sync issues, you could almost see why he was celebutard material in the first place, his boyish grin and general genial humour, the ghost of his physique still speaking somehow through his flab. It was quite moving when the different doomed crew members went one by one into the command cabin or whatever to tell their last words before the re-entry that would fireball the fuck out of the ship and kill them all. Gonad sang a song that his brother had taught him, Shirl, Shack and Shakey kissed and made up, Veronica Toothache dissed the bitches back home, Randy did some kind of whacked out Michael Jackson tribute that was a bit miss-judged and the ratings didn’t really endorse it, Abbi flashed her massive and massively predictable cleavage, Raj made a speech about mental illness cos her dad was a mentally ill and she wanted proceeds and donations to a charity. Anyway. When it came to #Dibber he had in mind to do a kind of medley of his catchphrases, set to a melody he’d been working on using a acoustic guitar left behind in the galley by one of the former Russian crewmembers back in 80-whatever, but in the end he just sat there alone in the cabin with the guitar and stared at the camera, all quiet, saying nothing, hardly moving in the softly blinking lights. He wondered how long the techs or editors would give him there, with just this silence and his stillness, and if the socials would say it was poignant or just sad or pathetic or selfish or just way too deep or like weird or whatever. Come what may. He held it as long as he could and later went back in his bunk at the crew quarters, eyes tearing up.

Three days later the SkyLub burned up on atmosphere in a quick burst of star fire, a few lumps of which inevitably came crashing down onto earth in the desert somewhere, down West, near where Los Angeles used to be. #Dibber’s silence went viral for a while as #Dibber, #DibberSilence and even #TheSilence. There was something about it, no one could quite say what it was, but people were fascinated, gripped, a little bit haunted even. A kid in Cairo put a soundtrack to it. Someone else dubbed poetry subtitles. A kid in Brighton, Endland (sic), sang an old sad and kind of eerie song. If you watched that, and could concentrate for a minute or two, however long they let it run, it could almost make you cry.