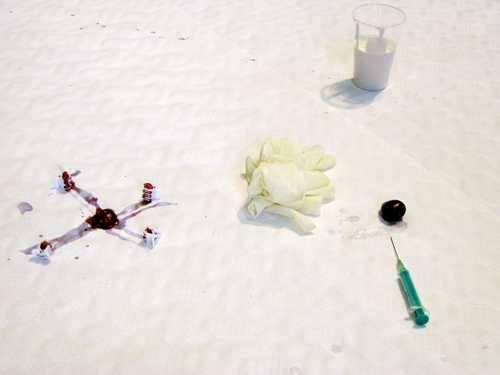 A chunk from a long piece I wrote a while back about Eva Meyer Keller’s brilliant performance Death Is Certain:

Deaths are enacted on cherries, one by one. When the last cherry is killed, the performance is over. The execution of the performance (small pun intended) is as perfectly simple, as lacking in frills or ornamentation as the structure. Meyer Keller moves between the tables in her deadly kitchen, moving from one killing to the next, in a mode that might be described as neutral or functional, but which in any case declines to signal comment on her task. She makes no drama of her decisions, no comedy or tragedy of her actions and no melodrama of her reactions. Slightly brusque, with a faint hint of the laboratory or cook’s assistant in her demeanour, her manner might best be described as that of someone simply doing a job. She does what’s needed, not more and not less. After an initial acknowledgement of those watching, she does not bother much with the informally grouped audience; does not seek eye contact or look for reactions to what she is doing. She is self-contained, to all extents and purposes too busy with her job to have time for social niceties and in any case, clearly convinced that what’s she’s doing – demonstration of death on her thirty-five cherries – both speaks for and is clear enough in itself not to warrant further mediation or explanation from her.

What I’d forgotten, watching the piece again last week in Toulouse was how much Eva’s performance tunes you to see detail. The difference (visually, emotionally, physically, performatively, metaphorically) between a cherry skinned with a razor blade and a cherry stripped with the abrasive edge of a nail file, the particular crackle and fizz of bare electrical wires pushed into the cherry on the plate, the way the smoke from a cigarette curls and shifts when trapped inside a plastic cup (gas chamber to some other unfortunate cherry). For something so small – a performance that takes place for the most part on two table-tops – it’s extraordinarily vivid. Made me think a lot about the way that any work creates an economy of expectation – a set of parameters  – which it then exploits. It’s great how sometimes the strictest of these restrictions create the most  beautiful resonant things.