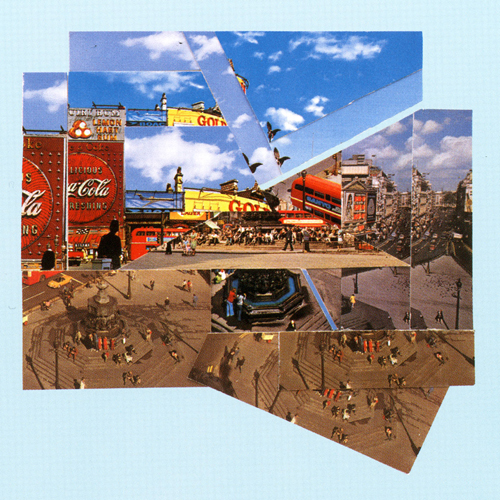 In the Barbican’s Panic Attack! Art in the Punk Years show earlier this year M. and I saw this beautiful collage using postcards, made by John Stezaker. It’s hard to find the right words for what it does to the space. Opens it, doubles and triples it, folds it on itself, makes one see it again. Makes visible some hidden aspect, makes it unreal, shows how unreal it already was in the first place. Makes it a sign for something, shows how it was already a sign for something. Makes geometry from it, shows the geometry that was already there. I love the patchwork sky, in different shade, cut and recut. The pointing shadows. The policeman. The lovers. The bisected pigeons. The crowd. The repetition of the vanishing point. The repeated spiral of the steps, the fountain base, the circle of the Cola sign. The words GOLD and COLA. The plane picture. The general sense of arrested whirlpool, a vortex. Red. Yellows. Blues. The colours from another time, colours which at the time of the works making were most likely already from another time.

Only just now Googling Stezaker I realised that I already knew his work via Vlatka, who’d  pointed out these collages he made of faces. See also here.
I find it strange how potent these are. For some reason I think I should be immune to them, but instead of that I’m gripped.