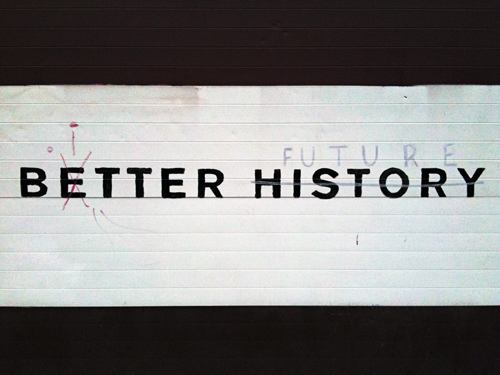 An image from Vlatka (on a wall down the street) and a text (re boredom) from my brother.

Had a few of those jobs, not the kind when you can voluntarily say yay give it a go for a full 32 mins. Couple come to mind, one poss the worst on a stone crusher. Stood on this fuckin huge 40 tonne machine on a footplate while a 16 tonner swung shit and concrete in front of my face, no cage, and dumped its old oily load of bust up town of brown field site into the rollin vibrating killer jaws of satan hiself, yeah, my job mind, was to grab steel and shite from the jaws of said beelzebub, and any other foreign matter too. foreign matter. crushed old stuff for foundations of new stuff. old steel fucked the machine tho, that was the job. 10 hour shift in fear of your fucking life every time you grabbed a 9 foot piece of reo and the fucker bit it already, yeah, snag you, pulled in, lost a coat once. was wearing it, but it was me or him. hope it went  in the foundation to build somewhere nice.Used to pick Brody up 6am in the van. Smell of victory v’s gave it up then, yeah brode was a great plant man, fix ought, but fuck , whisky before the work. Not a tot neither. hafe bottle. Early doors hometime he was a two handed pint man for the first half gallon. steady as a rock then, nay tremours. purple drain from his face to red and then start talkin and laughin with us all. I’d be away then. Id reckon he’d swamp another gallon and then back to the favourite homeside. a drop for the mornin and a victory v.