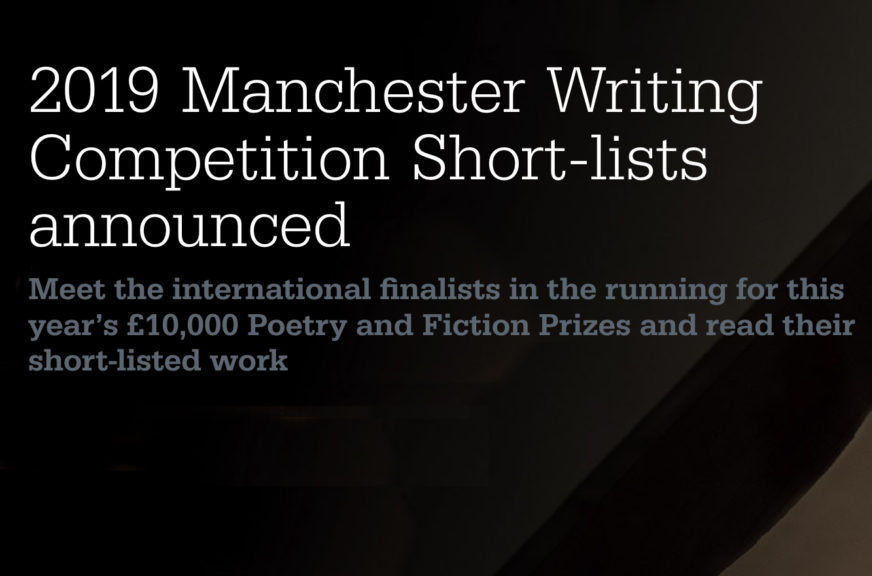 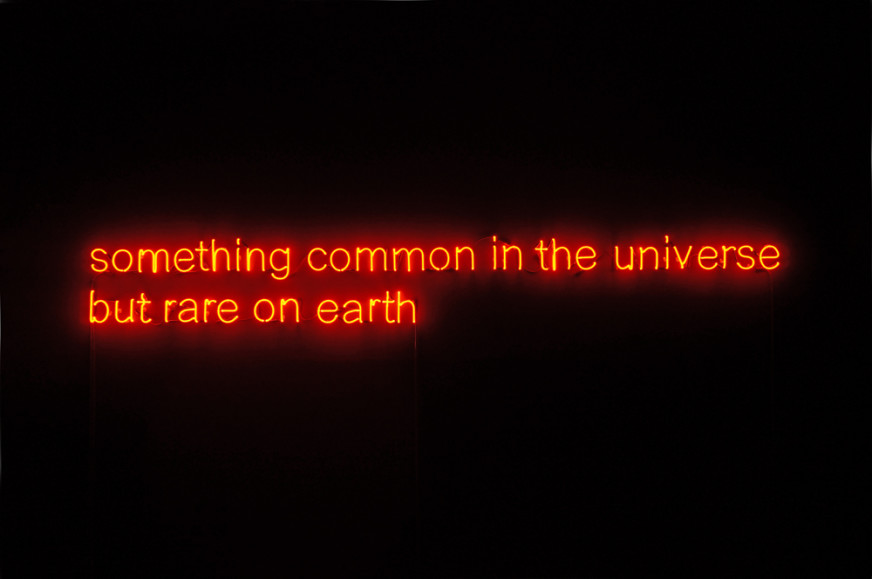 Tim will be showing a new larger-scale version of his neon piece ‘Something Common’ at the opening of the Ebensperger Rhomberg space in Salzburg. Preview Saturday 26 January from 6-9:30pm.

Tim’s neon ‘Keep it Simple’ features in this group show at Geukens & De Vil Contemporary Art in Knokke, Belgium. The exhibition brings together artists from different generations, nationalities and disciplines around the idea of ‘(Almost) Nothingness’. The show doesn’t refer to the philosophical thought that denies meaning and value to our existence but wants to reveal – on the contrary – the value of seemingly minimalistic realisations.

If it’s not meant to last, then it’s Performance / VITRINE BASEL

Tim features in this group exhibition  alongside Paul age Boutros, Sophie Jung, Clare Kenny, Hannah Lees, Wil Murray, and Rafal Zajko. The exhibition examines a diverse group of works through the lens of performance by bringing together a group of works that utilise a broad range of materials and processes.

Tim’s work ‘Further Provocations’, comprises 45 phrases, each periodically painted onto the gallery wall before being covered over and replaced with a new line of text. First shown at TATE Modern in London, this work will be presented for the second time at VITRINE, Basel. Like urban graffiti or changing billboard texts, these words are somewhat transient – seen one day, replaced, covered or partly covered over the next, in a process that allows residual traces of the ongoing work to accumulate in place.

Go With The Flow / Swim Against The Tide / Camberwell Space, London

A selection of Tim’s Fight Posters series (2012) will be shown at Camberwell Place from the 7 – 29 March 2019. The exhibition presents contemporary artworks that explore the power and economy of language to explain, coerce and subvert.

Between Us/ Kunsthalle Mainz 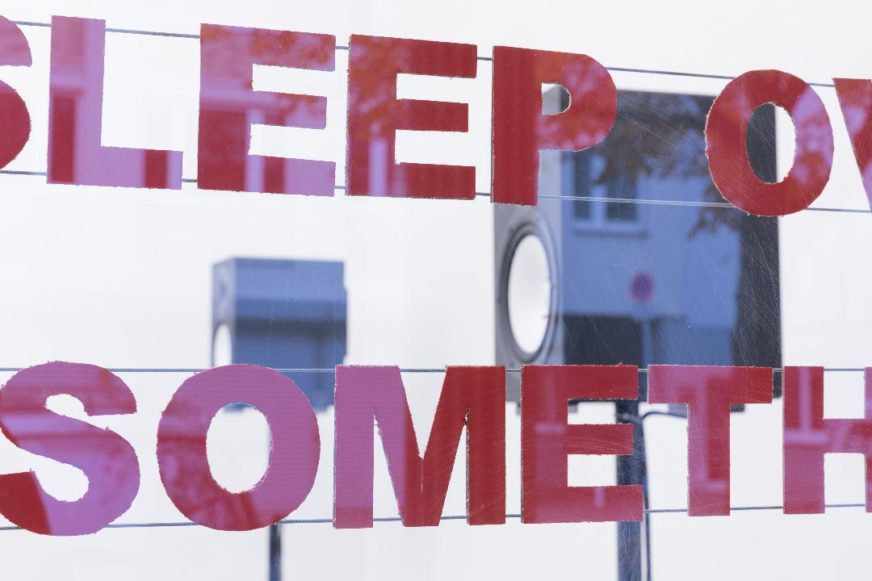 Tim has new work in the show Subject:Fwd:Unknown at fffriedrich in Frankfurt, curated by the MA Curating Students at Städelschule. Tim’s section of the exhibition runs 16 November – 25 November 2018. More info about the show here.

There are also upcoming gigs for Shown & Told Tim’s collaboration with Meg Stuart, coming up in Vienna (23 and 24th November) and Gent (13 and 14 December). More info and links here. 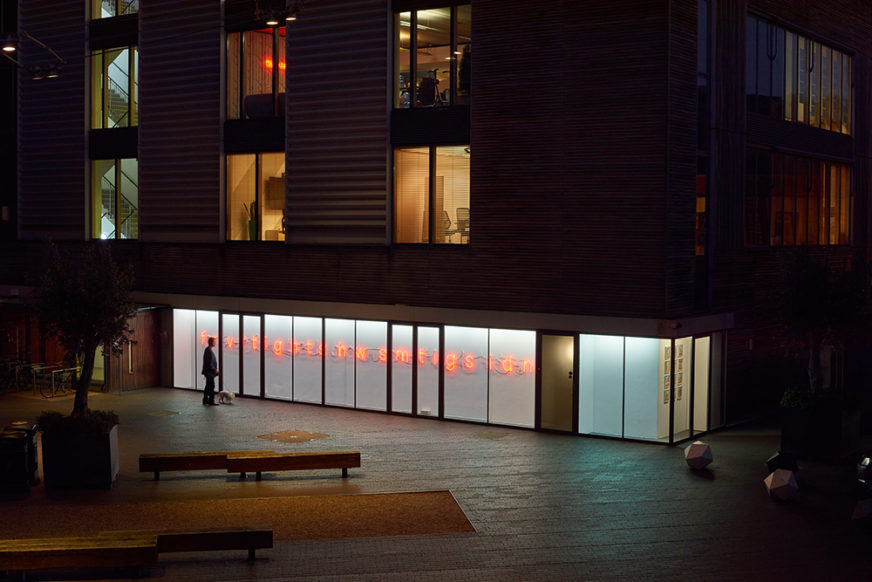 VITRINE is delighted to present a solo exhibition of work by Tim Etchells. Taking cues from its position in a busy public square, Etchells fills the unique space with a 12 metre-long neon piece that reads ‘For everything that is shown something is hidden’. The letters spelling out the phrase are only alternately illuminated, disrupting the text so that it is only partially visible on first sight. More info and images of this work here. Adjacent to and in a dialogue with the neon work, round the corner of VITRINE’s window space, Etchells presents a series of photographs taken during the protests that greeted U.S. President Donald Trump’s recent visit to the UK. Taken from amidst the marching crowd, the images document the signs that protestors carried, but, rather than the fronts, we see the reverse sides of the placards, revealing the diverse arrangements and colours of crisscrossed tape that holds them together.
More information and images of this work here. 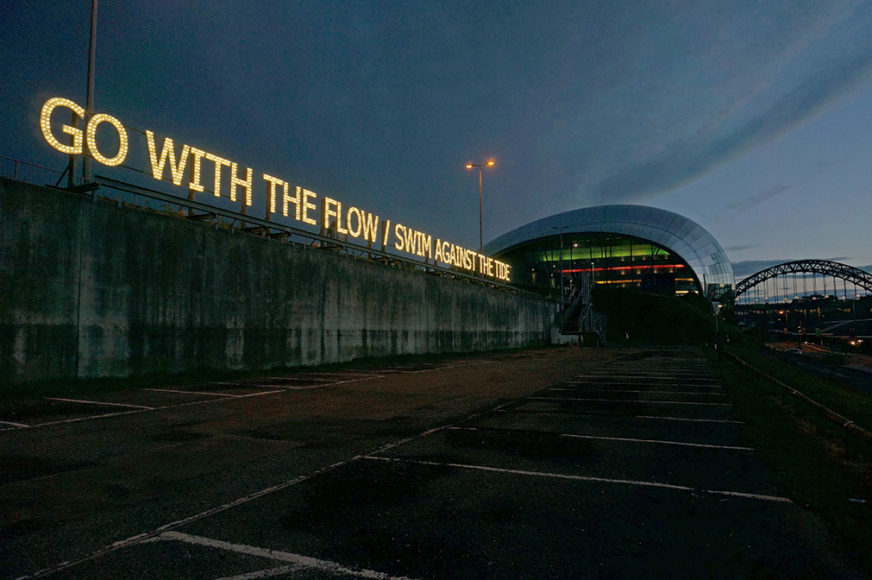 Great Exhibition of the North

Tim’s latest commission is a large-scale site-specific LED text sculpture, With/Against 2018 for Baltic Centre for Contemporary Art, shown as part of the Great Exhibition of the North (22 June – 28 August 2018). It occupyes a prominent position besides Baltic and above South Shore Road. The work looks out across the River Tyne, and can be viewed from the Gateshead Quayside or from the neighbouring Newcastle waterfront, providing a point of connection between the two.

The exhibition will run from 22 June to 28 August 2018. More information here.

Tim’s work has been selected for Frieze Sculpture 2018 which runs in Regent’s Park, London for three months this summer. The exhibition features works by 25 contemporary and modern artists selected and placed by Clare Lilley (Director of Programme, Yorkshire Sculpture Park).

Tim will show a new 3D piece, in powder coated stainless steel, titled Everything is Lost (2018). In place from 4 July to 7 October 2018, Frieze Sculpture is located in the English Gardens of The Regent’s Park. Entrance to Frieze Sculpture is free to the public.

The project Lân fan Taal (Republic of Languages) forms part of the Leeuwarden-Fryslân European Capital of Culture 2018 and is the site for a major new commission, In So Many Words, by Tim Etchells which inaugurates the newly constructed OBE Pavillion in Leewarden .

For Lân fan Taal – an exploration and celebration of language diversity, Tim has created three connected works grouped under the collective title In So Many Words.

‘Hear/Höre/Hoor/Hear’ is an installation of 88 single neon words in Frisian, German, Dutch and English, where each word refers to different uses of human speech or sound, from ‘whisper’ and ‘sing’ to ‘confess’, ‘describe’, ‘translate’ and ‘question’. Alphabets, is a multi-layered sound installation on ten speakers that mixes approximately 50 languages, the composition built from recordings of speakers who each recite the alphabet, with examples of words that start with each letter. To Talk To You, meanwhile is a recording by Etchells himself, comprising improvised repetitions and variations the same sentence, addressed  to the visitor in the form of a series of phone messages.

The installations In So Many Words will run from February to October 2018. More information here.

From 25 January till 3 March 2018 Witte de With Center for Contemporary Art in Rotterdam will transform into the Kunsthalle for Music, a contemporary space for the live exhibition of musical works.

Kunsthalle for Music is the large-scale institutional project of Ari Benjamin Meyers investigating and researching what it means to create a new institution for music in an art context today.

The repertoire of the ensemble has a wide range of commissions and a set of existing works by various artists and composers including Dominique Gonzalez-Foerster, Jonathan Bepler, Libia Castro, Ólafur Ólafsson, Wojtek Blecharz, Peter Fengler, Hassan Khan, Sora Kim, Yoko Ono and Tim Etchells, amongst others.

Tim’s work is a composition called ‘Of Sound Body’ from 2017. 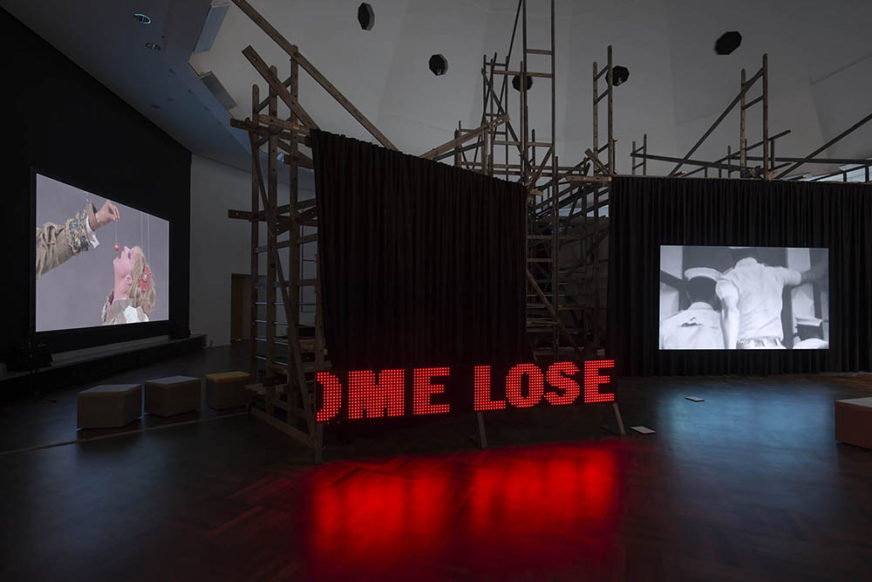 The exhibition Was sind die Wolken? (What Are the Clouds?) takes as its point of departure the Reformation Anniversary in order to reflect on freedom, emancipation, and imagination from the perspective of contemporary art. The exhibition’s main starting point is the short film Che cosa sono le nuvole? (What Are the Clouds?) from the year 1968, by the Italian film director, author, and journalist Pier Paolo Pasolini. This film revolves around a performance of Shakespeare’s Othello as a marionette theater—with the marionettes played by actors on strings. During the play, the marionettes question both their roles and their actions, with even the audience rebelling against the narrative. More info here.

Was sind die Wolken? (What Are the Clouds?) features two new works by Tim Etchells – a wall text installation Of And From (On Freedom)  and a scrolling L.E.D. text work titled W.S.L.S. 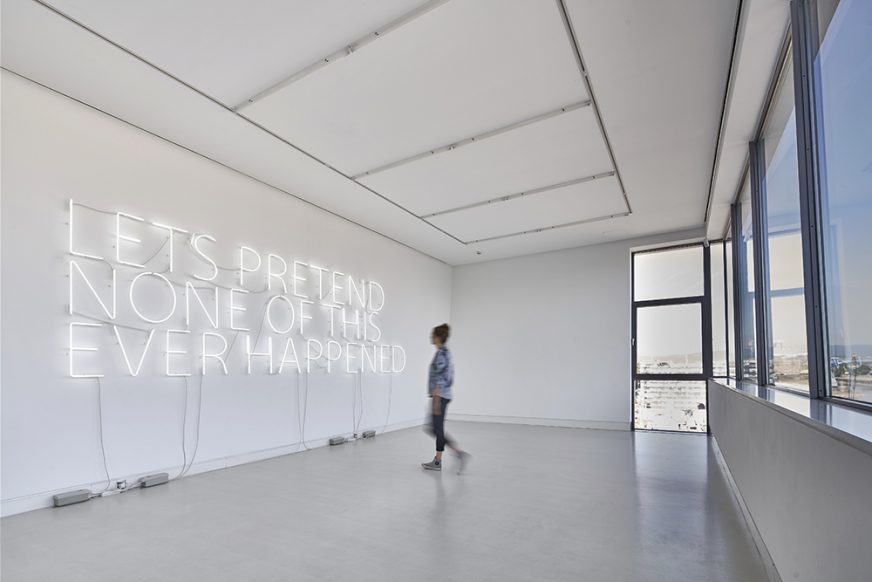 Can You See What I Am Saying presents solos by artist Tim Etchells and magician Vincent Gambini. In his improvised performances, Etchells creates a dynamic and unstable landscape of spoken language in which meaning slips, stutters, disappears and transforms. Gambini meanwhile works with bewildering close-up magic to guide viewers through a subversive and comical philosophical investigation. 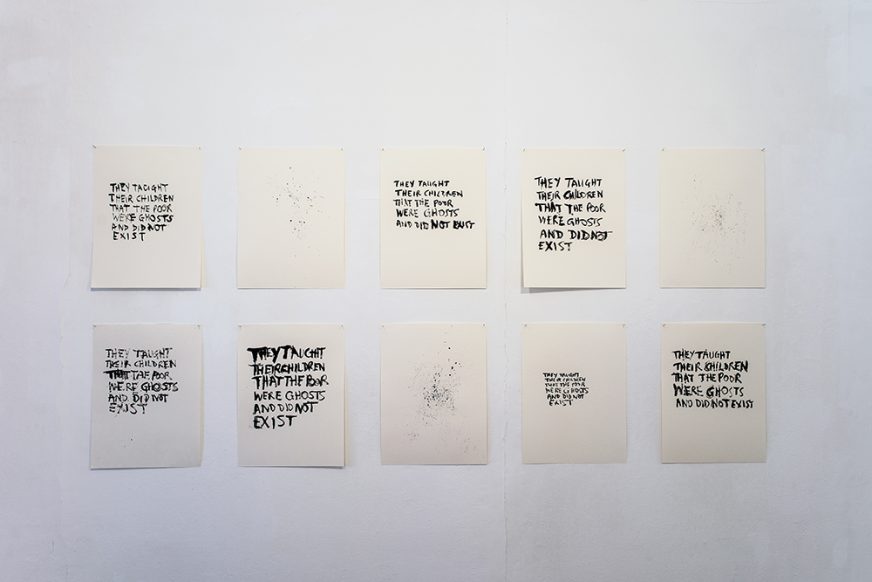 To See or Not to be at Kunsthalle Mainz

Tim’s neon work Let’s Pretend (Large), alongside his prints City Changes, his series of drawings Ghosts and video work Erasure will feature in the exhibition To See or Not to be at Kunsthalle Mainz that runs from 1 September – 19 November 2017. The show brings together strategies for disappearance, dissolution and transformation. It first explores physical and mental disappearance, then goes on to consider our approach to these issues, a process that commences as soon as a particular form or material aide de memoire is no longer recognisable.

A Choreographed Exhibition at CA2M, Madrid

Tim will also be part of A Choreographed Exhibition curated by Mathieu Copeland at CA2M in Madrid from the 19 September -15 October 2017. Two instruction-based choreographic works for three performers by Tim will feature in this show.

Everything we see could also be otherwise (My sweet little lamb) at The Showroom, London

At the opening night of Everything we see could also be otherwise (My sweet little lamb) Tim will do an improvised performance Work Files (Showroom). Curated by the Croatian curatorial collective WHW in collaboration with Kathrin Romberg, and Emily Pethick at The Showroom, the show is a contextualisation and rethinking of the Vienna-based Kontakt Art Collection. Preview Tuesday 19 September 6.30 – 8.30pm 2017 and the exhibition runs until the 11 November.

RE RE RE at Chelsea College of Art Summer Show, London

Tim’s work Some Imperatives and Emergency Telephone  will be shown as part of the MA Curating show at Chelsea College of Art entitled RE RE RE. Preview Friday 8 September 6-9pm and the exhibition will run until the 14 September 2017.