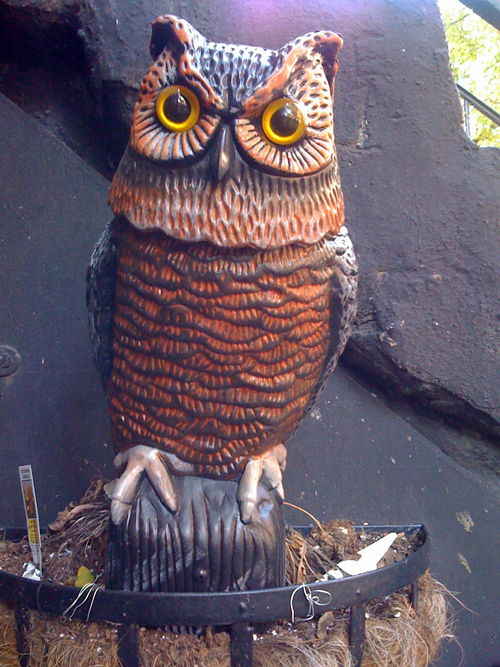 Local newspapers carried the typical story of a factory owner who consorted with local witches so that he could transform into an owl to watch over his workforce from up amongst the rafters in his premises, how the spell had been successful and the various dealings and shenanigans he had uncovered from up there involving theft and misappropriation of goods, also how the spell was intermittent and how he had randomly transfrmed from time to time – becoming an owl at a dinner party and at a trip to see a supplier of some essential goods that he needed, to his great personal embarresment and causing probelms with his wife and certain business partners who made comments on his strange transformations and started rumours that he was in league with a devil. Also how he one day transformed back from a owl to a person again without intending to do do and how he was thence stuck up in the rafters, clinging there, naked and alone, weeping, according to a caretaker they interviewed on condition of anonymity, until he got rescued at dawn by some lads from the Maintenance Department on extendible ladders. And how, as time passed he became at war with the witches because of how the spell was so useless and caused so many problems in his work and private life and how he trade descriptioned them for the bad spell and how finally, frustrated with the legal process, he sought to kill them and hired some other witches (from another town) in the pursuance of that act.

The geography of the building makes even less sense with the lights on. As if the architecture was meant, somehow, to be navigated late night in confusion, by strobe or ultra violet light, in a state of drunken sway, or otherwise staggering. In blunt daylight, or under the flat vibration of brutal fluorescents, the vertiginous and counterintuitive twists and turns of the stairwells are awful confrontations, abstract puzzles remaindered from some nightmare and rendered in concrete, where at night, routed though its quite other logic, filled with sweat, din of sound, and intoxicated bodies the same passageways are soft spirals, secret routes that turn forever in, out and around your desire. “The space”, he whispers, when you find him later “grows from the logic of the night”.

the pastness of the past you know. what was and what isn’t, what’s gone.
and your turned back, the perfect symmetry of your arms, your self-absorption,
the blurring/ flattening of the colours thanks to the nightvision so that body and landscape begin to dissolve into each other..
the pool of light and clothes at your feet.
the indistinguishable background that looks like it could have other distant figures,
the sea that could be sky.