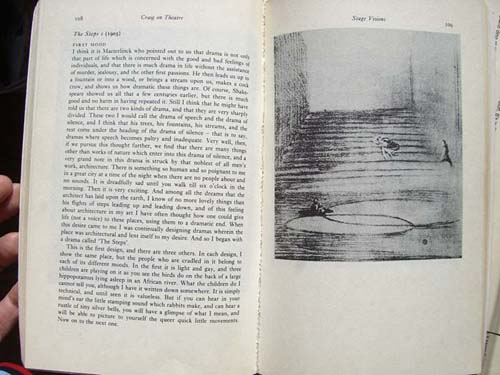 Following the Dream of a Performance posting on Monday, Ant Hampton from Rotozaza mailed pictures of a couple of texts by Gordon Craig.

“Your staircases thing yesterday immediately reminded me of a Gordon  Craig ‘vision’, and i started looking for the book, but couldn’t find  it. Later it turned up at B’s place and I went home with that and a whole pile of other books i’d lost… What’s really strange is that  it’s written more or less in the style of a notebook / blog entry,  and then today I’m reading your ‘dream of a performance’, an idea   also very in sync Craig’s ‘stage visions’… I’ll stick the whole page in here – you probably have this already. i find the way he  writes quite endearing, if not always that ‘clear’..”

Ant’s amusing pragmatic solution to sending me the text; to take pictures of the book (you can see his hands there, to the left) doesn’t work so well at the size of picture I’m using here, so I’ve retyped a couple of the nicest passages below. I don’t really know Craig’s writing but from this stuff it seems like an interesting, anecdotal, slighlty antique take on some good ideas. If you want to read more the book Craig On Theatre is edited by J. Michael Walton and you can find it on Amazon here.

Ant is heading to Minneapolis today to present Rotozaza’s table/headphone performance Etiquette. It’s at the Guthrie though I’m not sure about exact dates and times… so I guess use Google if you happen to be in the area and want to attend.

“There are two kinds of drama and… they are very sharply divided. These two I would call the drama of speech and the drama of silence  and I think that Maeterlink’s streams, fountains and the rest come under the heading of the drama’s of silence – that is to say dramas where speech becomes paltry and inadequate… If we pursue this thought further we find that there are many things other than nature which enter into this drama of silence. [For example]… architecture. There is something so human and so poignant to me in a great city at a time of the night when there are no people about and no sounds. It is dreadfully sad until you walk till six o’clock in the morning. Then it is very exciting. And among all the dreams that the architect has laid upon the Earth, I know of no more lovely things than his flights of steps leading up and leading down, and of this feeling about architecture in my art I have often thought how could one give life (not a voice) to these places, using them to a dramatic end.. And so I began with a drama called The Steps. This is the first design, and there are three others. In each design I show the same place but the people who are cradled in it belong to each of its different moods.”

“Here we see a man battling through a snowstorm, the movements of both snow and man being made actual. Now I wonder whether it would be better if we should have no snowstorm visualised, but only the man, making his symbolical gestures which should suggest to us a man fighting against the elements. In a way I suppose this would be better.

Still I have some doubts; for, following that line of argument in its logical sequence, then, would it not be still more near to art if we had no man, but only the movement of some intangible material which would suggest the movements which the soul of man makes battling against the soul of nature? Perhaps it would be better to have nothing at all.”