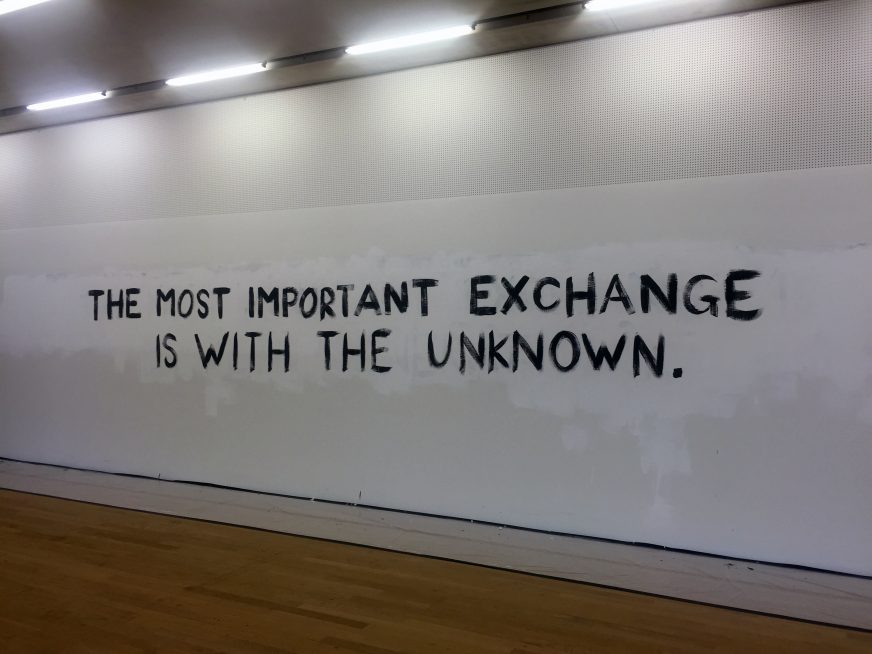 This week I’m in residence at Tate Modern, London, for the opening of Tate Exchange, located on Level 5 of the new building, Switch House. My programme consists of separate but overlapping events that run from Thursday 29 September until Sunday October 2nd.

Bunched under the name The Give & Take my residency explores the idea of exchange in different spheres of life, work and society; the complex processes by which we teach and learn from each other, the systems we are caught in that both frustrate and make possible our connection. The work itself is constructed as an exchange – a framework of events that’s built to encourage conversations, meetings, arguments, encounters between members of the public, artists and thinkers.

The work has four elements and starting at 12pm each day is a full menu of performances, talks and conversations.

The Give & Take Talks provide a key element of the residency. It’s a series of events in which a great list of speakers make presentations and dialogues each day, all focused on some approach to or experience of ‘exchange’. With talks about economic systems, intercultural exchange, exchange between humans and animals, exchange between family members, friendship, exchange with landscape and so , you can find the full schedule at the bottom of this post. The talks run in the Southwark Room on Level 5, Switch House, from 4pm to 8pm Friday and Saturday, and to 2-6pm Thursday and Sunday.

Three Tables is the second major element of my Tate Exchange project – a long interactive performance in which three performers (the amazing Debbie Pearson, Harun Morrison and Season Butler) exchange stories and have other interactions with the public on topics ranging from work and money, love, friendship and ephemeral things. This work runs every day in the main space on Level 5, Switch House, from 12 to 8pm Friday and Saturday, and to 6pm Thursday and Sunday.

Also present is Ten Purposes, a set of instructions distributed on cards for the public to pick up and activate in Tate, private and not-so-private performances which respond to the collection. Meanwhile the final element of my residency is Further Provocations, an ongoing performance manifested by Andrew Stevenson, in which a series of texts are endlessly painted, painted out and then repainted on the longest wall of the Level 5 gallery.

The Give & Take line-up