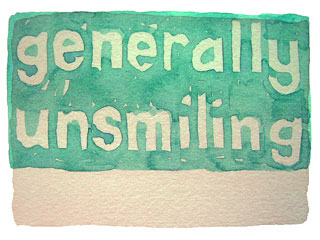 Each nights performance is relayed as a live webcast to anyone who is logged on to her website at  the appointed time – sunset where she happens to be. 100s of different writers and artists have contributed to her project – each writing a story (or stories) for her to perform.

The seed for each story in the project is a prompt word or phrase selected by Barbara from journalists’ reports covering events in the Middle East. She renders these prompts in watercolour and posts them on her website. Participants then write a story using that day’s prompt as inspiration. This is the one I did yesterday – a rather bleak tale, from the already bleak prompt line ‘generally unsmiling’ and these are the ones I did before, here, here and here. These other stories are also pretty bleak so you can see that I’m consistent.

There’s something quite exhilarating about the process of writing for the project – depending on how your time-zone synchs with the one Barbara happens to be in you get more or less time to write, and you get the prompt at different times of day/night. The previous one I did (from the prompt ‘wanted to get a good look’) I was in the UK while Barbara was in Australia. So I think I got the prompt at about 9pm and had to complete the writing before I went to bed. The other contributions I did were when I was in New York and Barbara (I think) was in Europe, so I was getting the prompt mid-afternoon and having to turn the writing around by midnight or so. For someone that travels so much it seems I get quickly confused by timezones.

I really like working against the clock as a writer and also on 1001 Nights Cast really enjoyed the fact of having to deal with some random stimulus. Barbara always lets you know where the quotes she chooses have come from but I never look at the larger news stories that she’s drawn on until after I’ve finished the writing. There’s something about the prompt – always a super-brief fragment – that’s very inspiring to work with, a level of incompletion that’s highly generative.

There are also some really great stories at 1001 Nights Cast from other people I know – from the writer/academic Adrian Heathfield, the director Peter Petralia, performer Cathy Naden (Forced Entertainment) and from the science fiction writer M. John Harrison – as well as loads more by people that I don’t know. My friend Sara Bailes just did a story there too. You can search for these other stories, and check out how to contribute to the project at http://1001.net.au