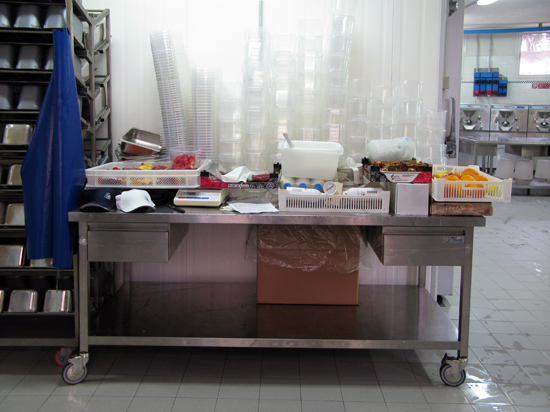 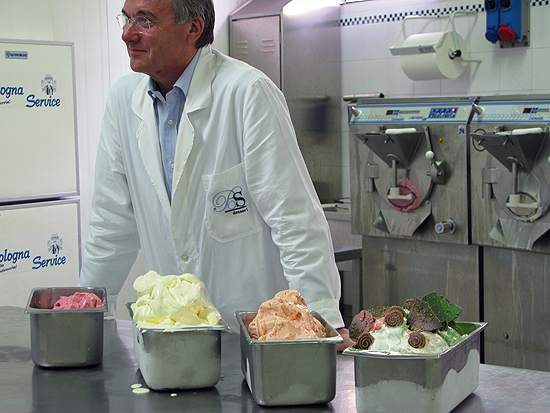 The last few days I was with Hugo and Pascale in Italy where we were filming for my Manifesta 7 piece Art Flavours. For the project I set up an encounter between an Italian critic/writer and curator, Roberto Pinto, and a gelato maker from Rovereto,  Osvaldo Castellari, whose gorgeous Gelateria Bologna in Mori was the location for the filming we just completed. To start the work off Roberto briefed Osvaldo on a small selection of terms (or zones-of-practice) from contemporary art  – The Body, Memory, Spectacle and The Archive – and after this Osvaldo was charged with the not-so-small task of making new gelato flavours to illustrate these concepts. Translating art-thought into tasty ice-cream may not be the easiest job going but it made for a pretty intense few days. I was really lucky in the collaboration/ participation of Roberto Pinto – he was so calm and generous in how he talked with Osvaldo –  smiling and at the same time taking the whole thing seriously, playing it all very calm, on a human scale as we sat in the back yard of gelateria near the cherry trees. I really loved watching the conversation between them even though I didn’t understand it that much until the translation came through.

One of those projects where you only realise what you are doing about half way through the thing, or where you are struck repeatedly by these kind of “oh *that’s* what it s about” realisations at different points in the process. At the end of Tuesday we were looking at the footage of Roberto and Osvaldo’s chat and watching the latter’s worried face in close up again and again had me feeling really unsure how the whole thing was going to play out the next day.

Luck was with me regarding the collaborators in the project a second time though. Because as much as Osvaldo was nervous, anxious or even incomprehending at the meeting with Roberto, he was smart and together and full of ideas and energy when it came to making the gelato – what we might have expected I guess but it was still great to see. I had to think a lot about what it is to be a person with a skill, with an affinity for something, with a sense of grace or ownership in a certain zone or practice. It was so great to see Osvaldo in his element, adding fruit for flavourings, whisking up the gelato. And great to hear his reasoning for the choices he made in the flavours too.

In my mind The Archive was always going to be the tricky flavour of the four. Hard to separate from memory (although Roberto did a great job in defining a distinction) and in any case summoning for me the idea of a taste somewhere between dust and yellowing book pages I wasn’t finding it the most appealing prospect. For Osvaldo though this all rolled rather differently as he decided that the human brain was the biggest archive we have, and that his response would be to create a complicated flavour, comprising many layers which would really necessitate thought and a trawl through ones mental taste-archives to locate and define its elements. Flavoured with some combination of fresh peach, strawberry and orange juice The Archive ended up as my favourite by quite some distance. Perhaps it was only once Osvaldo was well into his work – adding flavour to the first batch of gelato – that the project became truly tangible to me. I was stood in the big kitchen, watching him and his assistant at work and I was suddenly smiling at the thought that through the summer in Rovereto it will be possible to take a cone of gelato called Memory.

When the Manifesta show opens (19th July) in Rovereto, at Manifattura Tabbachi and Ex Peterlini, you can catch the video of Osvaldo, Roberto and the gelato-making as well as sampling each of the Art Flavours gelati. My piece City Changes – now completed in its sequence of 20 framed texts/drawings – will also be shown for the first time. More details here in the notebook a bit closer to the time.