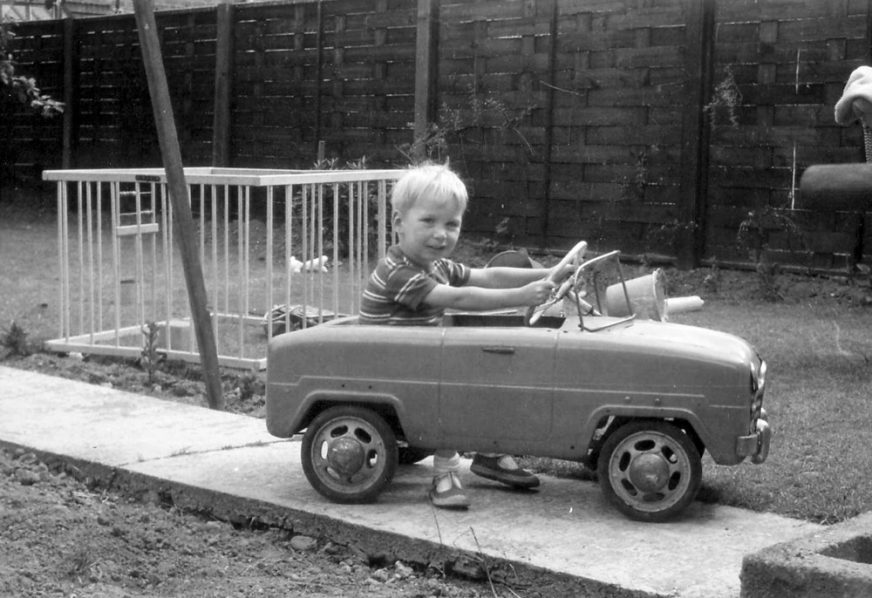 Through a collection of photographs showing artists as children, As Before directs the viewers’
gaze towards a set of already past presences, drawing us into a complex, dynamic act of
looking and imagining.

To begin the project, Etchells emailed a wide range of artists, asking them to contribute by sending
a single photograph of themselves taken during their childhood. From
spontaneous snapshots to professional photographs, the images donated come from
his friends and acquaintances, as well from artists he had only encountered through
their work, including those participating in the exhibition PROCESS, PERFORMANCE, PRESENCE at Kunstverein Braunschweig, in which this piece is first shown.

How do we imagine the artist at an early age? Do their childhoods even exist in our idea of
them as artists? Do we recognize the young girl staring straight at the camera? Or the young
boy walking hand in hand with his father? On one level, Etchells’ series invites us to think
about established (adult) artists, not as distant professional figures, but as real people,
whose work is rooted in a life and a personal history like (and different from) our own.

At the same time, the photographs in Etchells’ collection entice us to fantasize about the life
and evolving work of these artists: might the costume, little hat and casual pose of the young
boy pictured as he sits on a garden wall, tell us something about his future existence and
trajectory as an artist? Our backward glance provides an opportunity to think about the
process of becoming an artist and that of being identified by others as such. Of course, in the
artists’ selection of the images for the project, it also touches on the complex act and
process of self-representation.

For these reasons, temporality and existential issues are central to understanding the images
that are presented in As Before, taken from family photo albums, boxes in the attic,
Facebook albums and emails from home. Each shot aims to assert its own presence and
development. The childhood photograph epitomizes Roland Barthes’s idea: “That-has-been”.
This is true in two ways: in relation to the childhood memories of those who have grown into
adults long ago, and concerning the history of photography itself, which always makes itself
visible to us through the specific tint, quality or format of an image. The photographs of
children in As Before‘s “act of retrospective projection” connect strongly to motifs and
memories, even in the lives of those who view them.

As Before is shown as part of PROCESS, PERFORMANCE, PRESENCE at Kunstverein Braunschweig which runs 11 June – 21 August 2016.