One of the people I was talking to at The Story recommended a site called Roy Orbison in Cling Film. Don’t worry. It’s just a collection of stories like this one, tho apparently there’s a novel out there somewhere which I’m going to track down. (OK, I did, it’s easy – at Amazon, here). The author (a quite possibly fictitious Ulrich Haarburste) puts it well I think – “Not to speak boastfully but this is perhaps the only book you will ever need to own on the subject of wrapping Roy Orbison in clingfilm.” I’m going to get a few copies since I know it will go down well at Christmas.

I’m doing a talk with Ant Hampton at Gasworks next week alongside my solo show which is running there. The talk event is Wednesday 3rd March 2010. 7-8.30pm. Brochure says:

Artist and writer Tim Etchells and performer and writer Ant Hampton discuss delegation and collaboration across different fields of practice. The two practitioners will reflect on how the act of relinquishing control over the final outcome is embedded in their work and on their relationship to improvisation and incompleteness.

Ant and I organised the virtual programme of live-art for the ICA, True Riches last year after director Ekow Eshun announced the closure of the Live Art department there. If things continue to head downhill at ICA as rapidly as they seem to be doing, we may yet have to organise a virtual program for the entire building.

Currently Ant and I are collaborating on a small project which takes off from Ant’s ‘autoteatro’ production Etiquette. The new work – for two audience members/performers – is specifically designed to be presented in libraries and we had a very rapid-fire, playful and largely whispered meeting and try-out of some ideas in London last week at the British Library.

Meanwhile another of Ants ‘autoteatro’ projects GuruGuru – his collaboration with Joji Koyama and Sam Britton (aka Isambard Khroustaliov) – plays London from March 4 – 28 in an unusual space below Camden People’s Theatre, just north of Tottenham Court Road (other side of Euston Rd).

Also next week in London is one night of Kate McIntosh‘s All Natural. Her first project (there are three more so far already), All Natural starts with “a showgirl who seems to have emerged from a month lost in the forest – muddy, messy, and more animal than human”. It’s a fascinating piece and I’m sad that I can’t be there to see it again. Regular readers here will have come across Kate in fragments and quotes here and there in the notebook over the last couple of years. I contributed text to a later project of Kate’s (called Loose Promise) and since then was involved in her most recent performance Dark Matter, advising/mentoring (not sure about that word!), throwing in some text and asking useful (and useless) questions here and there. In some kind of complicated about-face Kate is now advising me.. helping us to shape the movement material in Forced Entertainment’s new work The Thrill of it All. All Natural is at 7:45pm, Thursday 4 March at the Purcell Room / Southbank Centre, London. Booking info here. Try to catch it if you can.

A US professor [Sidney Perkowitz, a member of the Science and Entertainment Exchange]… has won backing from a number of his peers after creating a set of guidelines for Hollywood. The proposals are intended to curb the film industry’s worst abuses of science by confining scriptwriters to plotlines that embrace the suspension of disbelief but stop short of demanding it in every scene. Guidelines themselves don’t seem to be online anywhere. Meanwhile the Science & Entertainment Exchange website, describes it as a program of the National Academy of Sciences, “providing entertainment industry professionals with access to top scientists and engineers to help bring the reality of cutting-edge science to creative and engaging storylines”.

Amusing to think that what’s wrong with Hollywood movies is the science – and the idea that fixing the science would somehow make the movies better is completely hilarious. What I’m left wondering about now is how other interest groups and areas of intellectual speciality could offer their services to film writers and producers in order to secure more accurate representation. We can imagine a lobby group of office workers or the homeless for example, or perhaps human beings in general could get together as a lobbying group to provide information about the reality of human existence in service of more creative and engaging storylines.

Haunted too by the idea that only when Holywood is 100% accurate on all topics will we be able to sleep comfortably in our beds (or cinema seats).

Nice presentation from Sydney Padua at The Story conference last week about her great Lovelace and Babbage webcomic, which included diagrams like the one half way down this page.

You know you are in Tokyo when the dawn brings with it an electronic chorus of speaking voices from screens and speakers, the sound addressing the gray light in the more or less empty streets and crossings – a song awaiting its intended ears. The city speaking to itself about pedestrians who are only just starting to emerge. Babbling and enjoining them to cross or to stay still, to buy goods or services, to buy themselves a better life. From where you lie – in a bed in room on the 12th floor of a hotel linked directly to Shibuya – this sound comes to you blown on the wind, in erratic wisps and gusts, with the slowly emerging traffic sounds and the wind itself, the light slipping in gently from round the edges of the plasticised curtains.

Coming home. Taxi conveys a cargo of passengers from London to Sheffield, adults and kids all sleeping all the way. A strange cargo these slumberers, all limb curled and eyes closed, in another timezone than the driver, daylight immune, dreaming, sleepfidgeting. 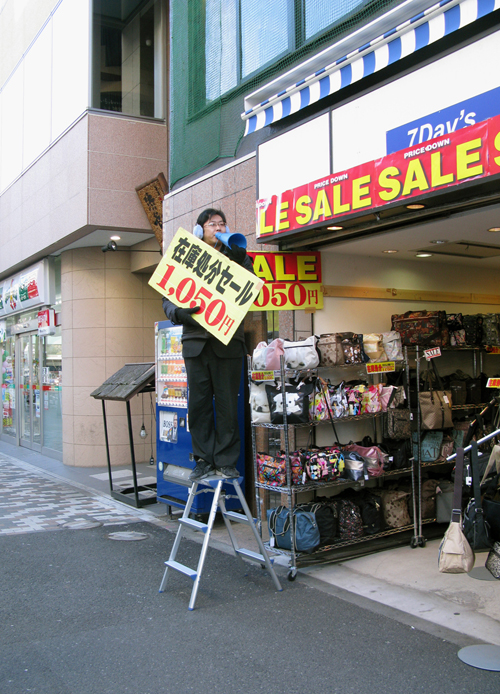 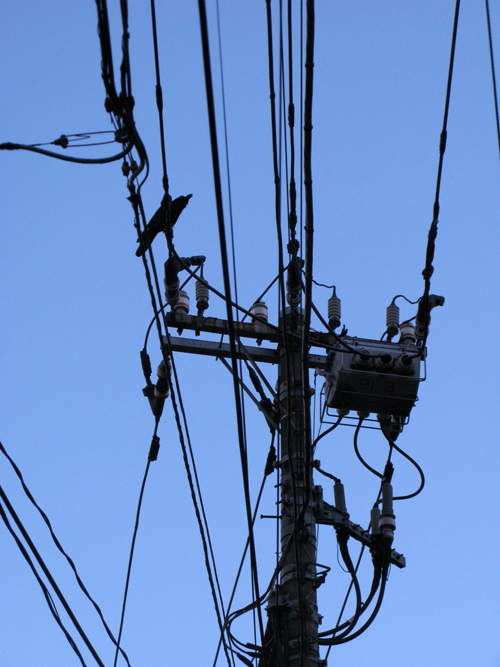 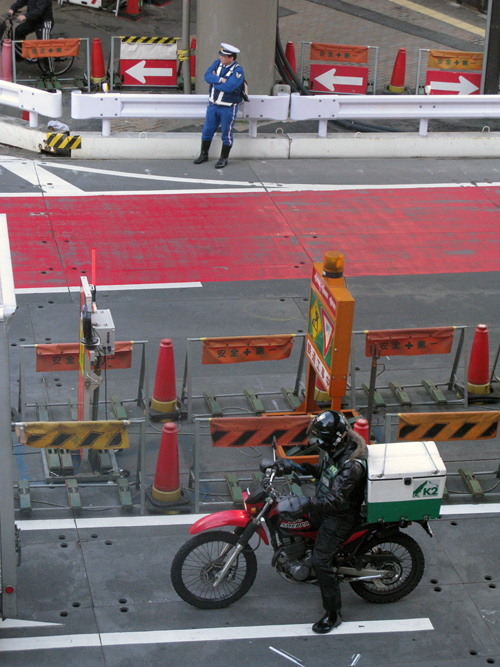 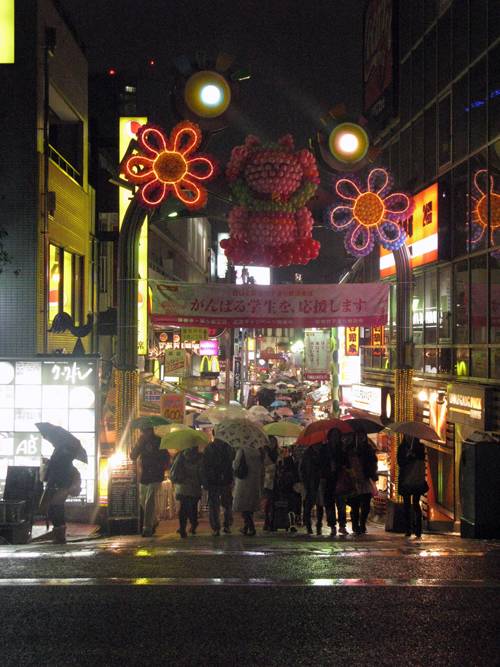 Just doing what it does, pretty much.

In Tokyo presenting performance of Sight Is The Sense.. (Weds-Friday) and Quizoola! on Saturday.

Meanwhile my Guardian Online ‘performance diary’ piece on the Cambodia trip is finally up.

One detail I found no space to mention in Guardian piece:

The funeral musicians don’t face the audience or each other when playing at a funeral. Instead they sit with backs together and face different directions. Because the dead are not with us. They are gone, scattered. 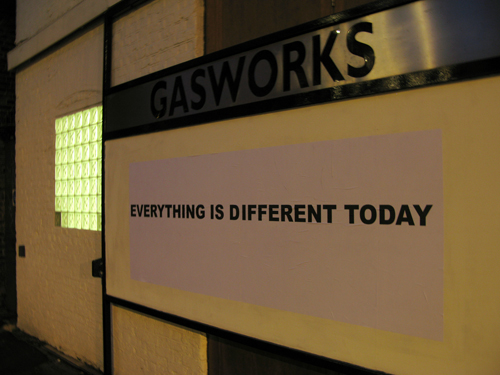