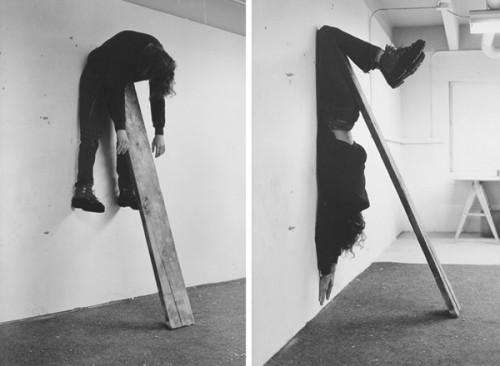 In the last few months I’ve been working with Tate Liverpool curator Peter Gorschlueter on a part of their new exhibition/display: DLA Piper Series: This is Sculpture. The exhibition is at Tate’s Liverpool location and opened this week. I’ve also made a new performance work for the gallery which will be presented a few hours each day over the next year.

Leading cultural figures from different disciplines will be bringing their own unique vision to bear on sculpture from the Tate Collection for DLA Piper Series: This is Sculpture. Transforming the first and second floor galleries are artist Michael Craig-Martin; designer Wayne Hemingway and his son Jack; and artist, director and writer Tim Etchells. From 1 May 2009 the co-curators present dedicated displays of sculpture which have been selected in conjunction with Tate Liverpool curators. The displays feature masterpieces from the Tate Collection by artists such as Pablo Picasso, Fernand Léger, Henry Moore and Barbara Hepworth, alongside recent acquisitions of contemporary art by Sarah Lucas, Jim Lambie and Terence Koh, among others.

The special section of the exhibition I’ve been working on with Peter takes the title ‘Performing Sculpture‘ and approaches the connections and overlap between sculpture and performance in a number of different ways. We have some great works in there – from Charles Ray (Plank Piece, pictured above) as well as pieces from David Hammons, Francis Alys, Mona Hatoum, Rebecca Horn, Michael Craig Martin and Cindy Sherman amongst many others. Alongside co-curating this section I’ve made a work which  speaks to and provides a kind of context for the selection – In Many Ways – is a playful more-or-less ambient performance that has a single performer in the space for a number of hours each day involved in an ongoing task.

One more or less incidental outcome of the project has been the view of the work behind the scenes at Tate. I’ve been fascinated with the processes and procedures that surround the art works – the emphasis on preservation/conservation, the fragmentary notes that are collected on how and in what ways works can or can’t be shown, the conditions for their presentation and so on. Last week we were up there for the day and watched all kinds of iconic pieces coming out of their boxes and packaging. There’s Piero Manzoni’s can of Artists’ Shit coming out of its locked gray plastic crate, the interior polystyrene packaging pinned shut and marked with a hand written sign demanding that the pin only to be removed in the presence of someone from the conservation team. Gloved hands everywhere. Even the curators aren’t really encouraged to touch and as unpacking and installing continues in different parts of the gallery someone’s busy moving around the room photographing everything as it comes out of the boxes – not taking pictures of the work but documenting the wrapping and packing so that it can be replicated a year or more later when this stuff comes off the walls. It’s C.S.I in reverse. There’s a powerful paradox to all this at times, esp when you get something like Jean Tinguely’s 1970 sculpture Débricollage  – evidently created using tools (hack saw, socket wrench, screwdriver etc) which clearly bear the traces of a life in which they were probably kicking around the studio or doing time on the workbench in someones’ garage – but now, formed into his tangled and unwieldy moving sculpture, are only approachable by a team of guys moving slowly and wearing surgical gloves.