More great quotes on the dead over in the comments at Mike Harrison’s Ambiente Hotel blog.

First Chiles Samaniego guessing which quote Mike was thinking about back here:

[…] the longer I think about it the more it seems to me that we who are still alive are unreal in the eyes of the dead, that only occasionally, in certain lights and atmospheric conditions, do we appear in their field of vision.

And then Mike himself following up my comment with this one:

“…Evan told tales of the dead… who knew they had been cheated of what was due to them and tried to return to life. If you had an eye for them they were to be seen quite often, said Evan. At first glance they seemed to be normal people, but when you looked more closely their faces would blur or flicker slightly at the edges. And they were usually a little shorter than they had been in life…” [p74/5, Mike’s ellipses.]

The reverse perspective in the first is so beautiful. And in the second it’s the banality that’s great. That the dead are “usually a little shorter than they had been in life” is laugh out loud funny I think. Reminded me of an old line I wrote but (so far as I recall) never yet used – that radio broadcasts from beyond the grave had been picked up, but that it was mostly nothing remarkable, mainly gardening programmes.

And above, weird (and extremely scary) kind-of empty stage at the Republican Convention during a video tribute to Cindy McCain.

Just read the ghost threads on your blog – on this evening just after I’ve finished my last experimental drawing class with my dear first years. I like to save “drawing and disappearance” for last. They like it. I start to use words like “composition” for one thing and that sounds like art. And they do a series of drawings where the room appears from around their easels and after each drawing I block out another window until after half an hour or so they’re drawing pretty much in the darkness which makes them go nice and quiet. And they’re erasing and effacing and pretty soon the ghosts start to appear from the little bits of white paper that have somehow remained untouched from all that graphite and charcoal and energy.

Relpying to B. I remembered this picture I took in Italy back in July –  my own latenight reflection in a building opposite the appartment we stayed in – 75m away I guess, a night with hardly a moon. I like that experience when your own reflection seems alien, distant. A blurred other world. 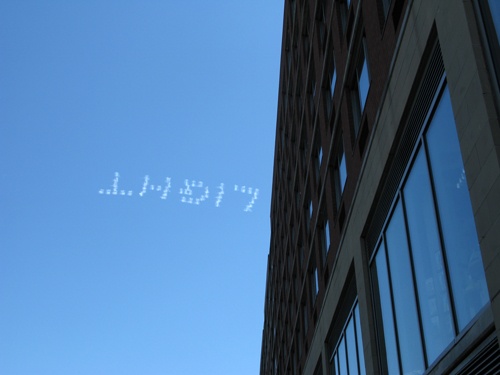 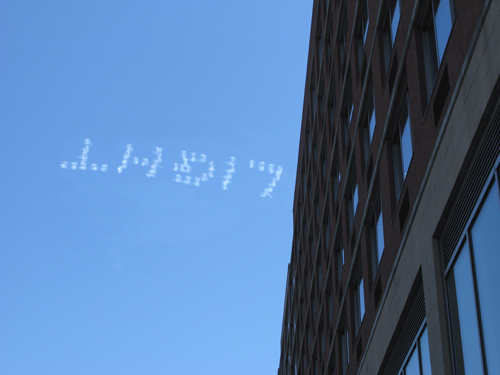