"One of the natural consequences of the excesses is that some entities will cease to exist."

US treasury secretary, Henry Paulson, quoted in The Guardian in gloomy, if stoically abstracted mood about the current stock market movements, which is either a crash, a slump, a spiral, a repricing or a rapid unwinding of risk, depending on who you're listening to.

He had marked me out as the man who would write the history of Joy Division. I initially resisted the role, annoyed that he was putting me in a place where he wanted me to be. His presumption that everyone would fall in with his version of events could make him seem like a bully. Even as it was happening, he seemed to know that 25 years later there would be films, and documentaries, and books about this story, which was both his story, and not his story. He realised more than I did that I would be writing about this period, from the Sex Pistols in Manchester to the death of Ian Curtis, for the rest of my life, hunting down the meaning of it all, following the clues that Wilson alone seemed to leave.

Reading Paul Morely's obituary and then article about the "exuberant nuisance" Anthony H Wilson. I liked Morely's sense above that he lived through something, the significance of which only became clear to him later – that sense of life lived in the present as a blind machine laying traps and possibilities for the future. Only later – in the moments of return (personal or communal) – do our guesses on the weight of things get confirmed or denied.

Also, and slightly different to the above, that strange sense in which lived experience comes to value, not as its lived, but in the future – at the point of its being history, and therefore (these days) potential commodity, cultural capital. The present as a machine for eating the past.

Chatting with Vlatka who reported this from a book she's reading about Francesca Woodman:

Watching Lars von Trier's film The Five Obstructions (2003) last night and laughing out loud at the third Obstruction. For the film Von Trier makes an agreement with sixties film maker Jørgen Leth that the latter will remake his rather stylish/minimalist/conceptual work The Perfect Human / Det perfekte menneske (1967) five times; each version in adherence to a different set of instructions, rules or prohibitions determined by Von Trier. One rule for the First Obstruction is that Leth must use edits of no more than 12 frames, another that he must provide answers to all of the rhetorical/poetic questions posed by the voiceover used in the original version. Rules for the second obstruction include a demand that Leth go to 'an terrible place on Earth, a terrible situation' and make a version of his film there, *without* showing anything of the reality he encounters.

It's this last rule that gets Leth into trouble with Von Trier and which prompts him (already playing up as a kind of whimsical tyrant) to punish Leth. His first inclination is to tell Leth to go straight back to Bombay and simply make the film again, only this time to do so *strictly* in accordance with the rules. This seems appropriate, or predictable in Von Trier's general mode of humorous sadism, but then he chances on much a better punishment; decreeing simply that Leth must re-make the movie again, but this time with complete artistic freedom, without obstructions.

Leth's very much the star of the movie. His slightly bumbling good humour, calm and stoicism in approaching the tasks is pretty remarkable. Perhaps the most touching thing though, is watching how, in making each of the Obstructions Leth always gets inspired. Even as he works through the most miserable and tedious constrictions you always see him starting to get excited, seeing chinks of light in the darkness – always sensing the possibility that somehow, despite everything, he might just find have found a really good solution, or make a really good film.

At Hugo’s for a couple of days, which in part involves a speedy photo-shoot of Adrian Heathfield and I, for a project we’re working on in Vienna later in the year. Photos against a black screen held up on poles that stands on the tarmac outside the open double doors of the studio. Natural light. While Hugo shoots, his son L. runs around the place, a human ‘watch the birdie device’ that keeps our focus in constant motion. For photos I can do maybe three varieties of not-really-smiling. Sometimes though (but not here) I manage to look as though I might be nice, or even kind.

Hugo said a while back that the most recent Douglas Coupland book Jpod has a page using the names of the developers of Photoshop; names which you see on-screen each time the programme starts-up. Weird ‘cos for a long time I’ve really wanted to do a story using them – I love it that the names Thomas Knoll, Seetharaman Naraynanan etc etc have a kind of ghost familiarity for many people, just from seeing them there as they slip by during Photoshop’s start up sequence. I’m pretty obsessed with names as a way to tell stories – the Forced Entertainment piece 12am: Awake & Looking Down is all names in combinations and the video Starfucker is simply a list of Hollywood A and B list celebs each involved in strange, dangerous or banal events. A kind of minimalist short story I’ve been working on for ages – titled The Chapter – is basically the membership list for a fictitious motorcycle outlaw gang. A version of the story was published ages ago at Another Magazine, but I’m still adding names and nick-names to the list which is now comprises something like 1,500 bikers and their girlfriends.

The New York Times has a nice long piece on Ant Hampton and Rotozaza here. It’s great to see the work getting attention. Can’t remember but NYT may require a log-in  to read stuff, in which case I’m sorry – at least you only have to do it once.

The troupe had already been practicing an unusual brand of cerebral theater, building darkly psychological dramas about surveillance, communication and modern love that use a mix of actors and unrehearsed guest performers who are told what to do and say by an Orwellian voice offstage. This chilling aesthetic is based on a certain uneasy ambiguity among viewers over whether a guest performer knows the script or is just following instructions.

But if the line between audience and performer seems blurred, Rotozaza’s new drama, “Etiquette,” which they created with Paul Bennun, erases it entirely.

This afternoon at the Star Wars exhibition with S.

Weird to be somewhere so very like a museum for something that doesn’t even exist,  which never existed. The artefacts are all there though, in their dim-lit cabinets, with all their labels and explanations in three European languages, so you more or less have to accept it.

But perhaps what’s even more strange than the exaggerated/mock reality the films are afforded here, is to somehow imagine the opposite. To think that on a certain day in the early 1980’s someone called George Lucas sat down and hand-wrote a ten page outline for a film that had not yet been made and called it Star Wars. And that subsequently he and certain other people sat down to imagine the characters, locations and objects of its world – making drawings and plans of what they might look like, going through versions until they were happy with these plans. I say this is strange because it can seem from the current moment, that these things must have always been known. It’s so familiar, so much part of the background these last twenty odd years, even though I’m not remotely a fan of the films. To think that it all had to be invented, even to imagine that it might have turned out otherwise, to see it as something other than a cultural given, is minor-league unsettling, like one of those first incidents that plague characters near the start of Philip K. Dick novels, before they really start to go crazy.

Transport ticketing system goes all Buddhist on me: 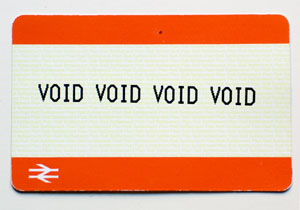 Like all its neighbours the street is jammed incoherence in the form of restaurants and bars, part-Spanish, part-Turkish, part-Mexican grill, a lot of Italian, some Zorba the Greek, some Dim Sum, some Indonesian, some non-descript and some Indian. Your eyes take a beating first-off from the jumble of signs (some neon, some not) and the overlapping maze of job-lot discount plush and patio furnitures that are breaking ranks all over the street plus its hard not to wonder why the décor/colour-schemes of these places look like they got chosen by the managers cousin or by his brothers second-wife or like they were simply determined by some bloke who sold them the remnant 12 litres of paint left over from some other place he’d painted elsewhere. Anyhow. It’s not a spectacular area in any way – to call it run-down would give it a glamour that it doesn’t have. Its more a kind of roughly approximated but somehow defective acceptability that seeps, grows and cancers everywhere just like the narrow pavement with its topping of sporadic food remains and broken wine glass. No big deal.

A young guy, skinny, looks like he might be Spanish, sporting Superman t-shirt and with him a girl in white shirt and jeans – could be his younger sister or maybe girlfriend, impossible to say. They come hurrying determinedly through the crowds of people that are looking for somewhere to eat, or who maybe have just eaten already and want to find somewhere they can go to forget about it, which probably won't take long. They come past the dazed or stoned Australians and the drunk English and the grim Germans, and the family packs of Americans – all kids with braces walking single file and yelling ahead to their dad – and the occasional groups of Dutch-guys-in-suits-and-ties types (impossible to read). In her hand she (the girl with the Spanish guy in his Superman t-shirt) is carrying a muffin or a cake of some kind, wrapped in cellophane, and as they come through the crowd past the table where we are sitting, they break their stride, just for a very short moment, in which she holds the cake flat in her hand and he photographs it, with the small digital camera that he has, and once the picture is taken they are gone – vanished in the endless flow of pedestrians and incomplete and incomprehensible narratives that make up the night.

S's nightmare, he said, seemed like an episode of something, because first it was happening and it was horrible and then it stopped, and he thought it was over, and then it all just started up again.

My friend K. wrote about starting rehearsal work on a bunch of text material she's using in a new project, with words from different writers (me included). First work in the studio has simply been reading the texts aloud. I really like what she says below about this part of the process, and her articulation of the relationship between text and performer, very smart.

Of course as soon as I'm trying this – the main questions come up….One thing is – why have a body in space telling these stories? Why  not leave them to be read – published, or on the net. This has got me  into the area of 'what are these stories doing to me/you as I tell  them?' – something about what happens to a body when it is taken over  by the images it is reading. It's reminding me of stigmata – a story  that takes over a body, or maybe a body that takes over a story,  anyway, that the thing leaks into the body of the teller, and the  listener too. That helps a bit necessitate the telling of them.