Why cannot art exist any more in the West? The answer is simple. Artists in the West are not lazy… Laziness is the absence of movement and thought, dumb time – total amnesia. It is also indifference, staring at nothing, non-activity, impotence. It is sheer stupidity, a time of pain, futile concentration… Artists in the West are not lazy and therefore not artists but rather producers of something… Their involvement with matters of no importance, such as production, promotion, gallery system, museum system, competition system (who is first), their preoccupation with objects, all that drives them away from laziness, from art. Just as money is paper, so a gallery is a room.

The Praise Of Laziness – Mladen Stilinovic

The rest is here. 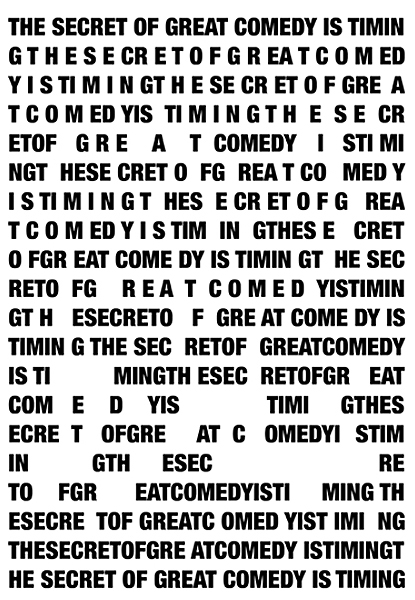 Following my post And Kinder on Derek Jarman yesterday, Barbara Campbell sent me a link to this lovely work on Neil Roberts’ site. She wrote:

“Neil did quite a few of these neon works sending out messages across cities and lakes. They were more kind than angry – he tended that way. I think they are just beautiful. There are so many stories wrapped up in them, both before and since his death. But anyway, the one I sent was from a commission in Perth in the 1980s at the height of the first resources boom there where commerce was going crazy and tycoons were buying Van Gogh’s and America’s Cup winning yachts and UK-sized tracts of the country and there is something touchingly provisional about the quality of neon isn’t there – it just seemed to stop all that madness in its tracks, or at least that’s how I romantically imagined it to be.”

I’m writing again for Barbara’s amazing 1001 Nights Cast next week. Hard to believe but the three year project has just eleven more nights to go. More from me about here soon I am sure. It’s very much on my mind.

The simple phrase spelt out in the sign invites a complicity with its author, proposing an act of shared denial or deliberate and very public forgetting. The ‘this’ referred to however – the situation, event or encounter we are invited to forget- can’t be fully inferred or understood from the information supplied. In the ensuing confusion even the viewer’s encounter with the work is threatened with the possibility of erasure.

"Things have got awfully tidy recently. There is a lot of finish on things. Clingfilm gloss and the neatest of hospital corners."

Got really sucked into the Serpentine's Derek Jarman show put together by Isaac Julien the other week. Though I have a soft spot for The Last of England and Jubilee I was never really a huge fan of the films (bar Blue I guess) but then liking the work never seemed all that important about Jarman. It was always about something else –  his pursuit of a space outside the mainstream,  political anger, beauty, gay sex and the weird meeting of classical and homemade aesthetics. There was always a whiff of the pantomime, someone says in Julien's recent Derek documentary. Yes, that and the home-movie and the home-porn shoot. Serpentine for this show is mainly slowed down and dispersed video and film – Blue from floor to ceiling in one room, a very dreamy five (?) projection installation in another, Julien's movie in the third space. It was such a good place to spend the afternoon – a lot of people leant against the wall in the half light or sat curled and soaking it in. Thatcher crops up once or twice in the Julien film. That fucking voice and those eyes are going to stay with me to the grave. Hard to comprehend the psychic impact that person had. Ughh. Jarman's more than a good antidote though and there's so much of him, he's practically seeping out of the walls – warm and dark and funny and dying and generous with his brilliant eyes – you can find some kind of exemplary strength and dignity there.

"Maybe now it is as bad as you and I used to say it could possibly get.. " Tilda Swinton's letter to Jarman, written after his death, portions of which are used as a narrational frame in the film, got slagged off for its hypocrisy somewhere I read at the weekend, because of all its' anticommerical talk. I liked the letter though and just found a link to a version of it online. Anyone who wants to talk about "the dead hand of good taste" has got my ear, especially if they've got eyes like Tilda's.

"The dead hand of good taste has commenced its last great attempt to buy up every soul on the planet, and from where I'm sitting, it's going great guns. Art is now indivisible from the idea of culture, culture from heritage, heritage from tourism, tourism from what I saw emblazoned recently on the window of an American chain store in Glasgow – "the art of leisure". That means, incidentally, velours lounging suits by the ton."

I came out of Serpentine into a different London, thinking we need to be angrier. And kinder.

When you step through the doors it's already clear that it's not a very good place to be. Not because it's too dark in there but because it's too bright – lit wide, harsh and indiscriminate – fluorescents bouncing in all directions. The bar itself is an island structure of wooden veneer in the dead centre of a room comprising yellow stained and painted walls given recent respite by the smoking ban but still looking well sick, propped up, pinned down or held in place by an arrangement of random slot machines. Above the bar there's a large square of mirror tiles on the needlessly high ceiling – the tiles themselves appearing like a remnant of some other decor, some other logic, some other time. Look up there now and you just get a pointless surveilance-eye view of the dry and rotting insides of some plant pots stacked up on high shelves or else a vertiginous look down on the balding heads of some blokes sat right on the other side of the bar. It all depends on your angle of course and you figure out that it probably pays not to be slumped like the old guy to your right, whose head is rested at a drunken angle so obtuse you can't even start to triangulate his view. Everyone in the place looks like they've been in here for some time. Days certainly, weeks even. Others blend into the carpet and the wallpaper in ways that make you think they might have been here years. Life meaning life.  Frayed personalities. Old wounds. That dispersed cluster of people sat or stood here and there round the wooden stools of the bar who give off an energy like they might all be the publican or a barmaid or just a regular regular that helps out from time to time. A family extended so far that it becomes meaningless, unsure of its own edges. Division of labour. Distributed consciousness. A woman with a handbag, all dressed in brown. A blondish woman in green – 30-35 maybe going on 50. The guy you have to step past – a stumbled 'shall we dance?' moment – has kind eyes long ago exploded with drink to watery pools, a dirty football shirt. Toothless laughter from some old guy hunched at the bar. From the other side comes the sound of singing, you can't really see who but the ceiling mirror points back to the bald heads.

At some point the Sky Sports commentary/soundtrack that grips everyone and no-one gets replaced/drowned out by an unexpected track from the cd jukebox and there is some yelling, some waving of arms to unplug the fucking thing, get Tony, the remote, or reboot or turn down. The music lingers, unwelcome, then goes sent back to the ether or the methadone. You are back to the football already when a bloke barges in from the street  very rapidly, followed by some other bloke in hot and cold running pursuit, the latter with his fists swinging and yelling a whole lot of fucking this and fucking that. Straight line from the door is the determined trajectory of GBH or wounding with intent at which the extended and dispersed group around the bar reforms into new shapes, an amoeba steeped in Carlsberg, all yelling, defending the chased man, making lunges to grab the other one, legs and arms everywhere. Stools are thrown around like street trash in a storm – half-hearted weapons, then temporary barriers. There are scuffles, grabs. A temporary standoff. You meanwhile have edged (rapidly) to the other side of the low table, just slightly out of striking distance but trapped between it and the wall. The fight lurches again, you calculate some possible exit routes as the yelling kicks off once more to a background chorus of 'call the police'. Sky Sport continues where in the old days the piano player would've stopped. The intruder gets pushed out the door in a flurry of fists but then just seconds later comes charging back again, double-quick-time, for a rebate of scuffling before a final expulsion.

All this followed by a long, drawn out confused and overlapping dissection of what happened, what started it, who started it, what's wrong with Jean Paul who loudly protests all innocence – they just came by in a van, they were outside, just came by stopped the van and were shouting something then the whole thing kicked off. Speculation that the guy that came in just now had a knife. He had a knife in the back of his jeans or in the back of his belt. He had a knife. Something about him going back to a van to get it. Something about a knife. He had a knife down the back of his jeans. Some saw it, some did not. You sit again. Various figures in action – the woman in brown takes her handbag upstairs for no particular reason,  a friend of Jean Paul goes to peer from the back window, someone else to peer from the front doors to see if they are lurking or plotting outside. No, apparently not. Just traffic. Passersby. What previously passed by for reality ebbs back in again slowly, very slowly, and you think about leaving, eye the door space. As you sit there and think about it, the watery eyed bloke emerges from a door at the back somewhere, walking very slowly, carrying a baseball bat and a long handled garage mechanics wrench made of rusted metal, one makeshift weapon in each hand, then leans them up next to his stool at the bar all casual-like, in case of the intruders' recurrence, and fluidly re-engages in the general level of chit chat. Things quieten down. A new person enters, unaware of what went on before, orders a drink. His mate arrives. The place becomes less like an amateur warzone and just another horrible pub. Taking this perhaps, as a sign to exit, you drink up, and leave.