That Night Follows Day is finally heading for performance in London – two gigs at Queen Elizabeth Hall as part of the lovely Spill Festival, next Tuesday and Wednesday 6 and 7 April at 7.45pm.

My videos So Small and Erasure feature in the show Roll it to me at Collective, 22-28 Cockburn Street, Edinburgh, EH1 1NY nearby Waverley railway station.The show runs 14.03.09-09.05.09 and also features work from Pil and Galia Kollectiv and TeamPingPong.

I was there in the blitz and it’s come to me, relatively recently, that my love for abstract sounds [came from] the air-raid sirens: that’s a sound you hear and you don’t know the source of as a young child… then the sound of the “all clear” – that was electronic music. I mentioned the Catholic bit: I was taken to benediction as a child and it was all in Latin -plain song hymns in an abstract language. After the worst blitz I was shifted to Preston, where my parents came from. It’s only today that I’ve realised that the sound of clogs on cobbles must have been such a big influence on me – that percussive sound of all the mill workers going to work at six o’clock in the morning.

Been following various links about Delia Derbyshire who worked at the BBC Radiophonic Workshop in the ’60s producing electronic music and sound effects for TV shows (Dr Who theme, for example).  Here’s a short interview from which the quote above is taken. Maths and music at Cambridge. Quite some more digging to do too – want to have a proper look around this site for another BBC Radiophonic Workshop pioneer Daphne Oram.

“Mr. Beck presents himself as a revivalist in a troubled land. He preaches against politicians, hosts regular segments titled “Constitution Under Attack” and “Economic Apocalypse,” and occasionally breaks into tears.”

This New York Times article about Glenn Beck, Fox News’ highly theatrical and increasingly popular news anchor had me searching out clips of Peter Finch in the movie Network (1976) which I haven’t seen in ages.
Quoted in the NYT piece conservative writer David Frum says Beck’s success “is a product of the collapse of conservatism as an organized political force, and the rise of conservatism as an alienated cultural sensibility.”

More here on the Conficker virus/botnet we love to read about.

I've been working on a lecture presentation with Hugo and Adrian, titled Intangibles and concerning presence and other hard-to-quantify aspects of performance. Seeing as how I'm in Brussels most of the time these days my contribution was a series of video fragments which Hugo and I recorded on various early mornings in Essen, Vienna and London, usually in the space between breakfast and a taxi to an airport. So I was doubly absent I guess. I also wrote a letter to Hugo and Adrian, which they read in Exeter last week, as a part of the presentation. An excerpt:

What you know already (but i hope you dont feel it too much in the moment) is that some of these words [in this letter] which seem to form a flow, a coherence, a more or less solid Tim that is speaking/writing, some of these words, in this flow, were rather written as insertions, not part of any flow at alland in fact not even written in the scene i described – my sat on the bed – but written much later instead perhaps added whilst I was in transit to brussels (airport, plane) or added (still later) in Brussels itself (in the apartment there)insertions – a word here, a sentence there, a paragraph or two in some other place – which are by now indistinguishable from the rest of the fabric of this writing.

There so many insertions and rewritings in fact that its probably wrong to think of what's written here as anything other than a layered accumulation of tracesnot so much a single thing as an unruly concoction, an assemblage of voices, the pressed and gathered sum of many moments, somehow tricked into one place.

I had to that same idea about that watching the dancer Fumiyo Ikeda in rehearsals today
she was dancing something connected to the word 'forgetting' (we're working from words somehow)
and she was doing this thing where (she said afterwards) "all the corners of the room were calling" to her
like she was trying to be (somehow) in relation to all directions
her body contradicting itself, if you can imagine that
limbs stuttering, arms heading one way, head another, legs dipping and turning
not especially forceful or angst ridden this, just a body flickering, layering its own intentionalities, belying its own impulses
even in short bursts all this was exhausting to watch…
a kind of muliplication of presences produced by one body, a strange quantum maths.

I even had a simillar feeling weeks before even when she stopped dancing during one rehearsal
and in silence simply re-walked, re-traced her journey in the room – marking its ups and downs, walking and silently pointing the twists and turns of her progress
before stepping back up and into dance again –
i said afterwards "like there were two Fumiyo's" – once dancing, the other following behind….  some tricky maths again. 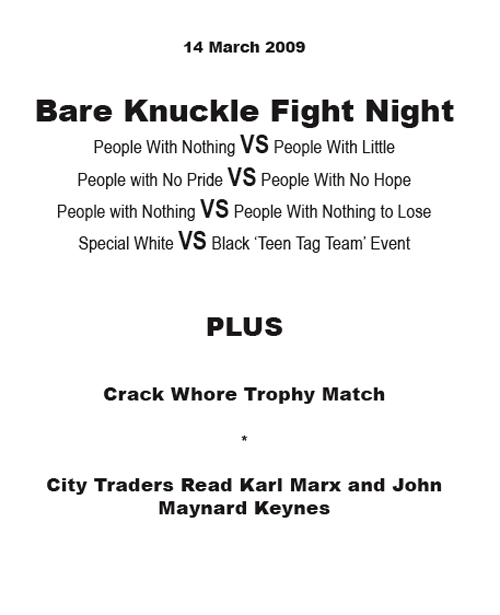 [Rough layouts for a publication project I did for Frascati Theater in Amsterdam who are currently running a mini-season titled CRISIS].

Sheffield. Late in the night/early two mornings ago, woken by a drunk bloke yelling to his mate in the street.

He speaks with that special quality of the voice reserved for drunks and the guys who voiceover movie trailers – where the emphasis falls on every single word equally and with great force and enthusiasm never once not even for one single moment letting the constant patina of vigour or animation drop – only in this case, that of the voice that pulls me out of sleep, all hideously slurred.

In another city two girls are sitting on a bench in the railway station. As your train pulls away you see that one holds her mobile out to the other, and sat together there on the bench in the sunshine, they watch the tiny screen, on which it seems from their gestures, that a picture is moving. They discuss what's in the image, the one whose phone it is explaining something, laughing, smiling at the other, then the fingers of her hand touch the screen for a moment, a kind of contact with this person that is absent, the gesture soft and practical at the same time, its intimacy to the surface of the screen maybe connected to love, or to desire.

In a dream I'm watching the start of a horror movie. Teenagers are entering a high school. From the haircuts it's 60's and the film quality (analog, rich in browns and yellow, half chemical, half autumnal, backs that up). The clip plays in slow motion. Not sure if that's part of the film or part of the context – we're watching the movie in some kind of film studies class. There is discussion of this opening sequence. We're watching it again and again. One shot down the corridor, a second shot at an angle, kids rising from a stairwell, turning right towards the camera, some of them turning away. Watching this you don't know yet which of them will be the protagonists, which of them will enter whatever tangled web of terror and entrapment the movie will bring.

Back in Belgrade after the thing they now call the balkans conflict. A friend who himself had been transplanted from an area of lush green beauty by the sea and a family home and farm where the life was dictated by the seasons stared up at his new home of smoke and concrete, a tower block of proportions and disorder that is only known in eastern europe. His family had all had to move with threats of certain death from a place to this. Mother was dead, but father grandfather and grandmother all hung on as shadows and ghosts in this new place which affronted their very existence. Undead. Granmother and grandfather used to climb down the stairs from the summit daily to sit on a bench on a green verge by a main road. The lift had long since begun a new life as a home for rubbish excrement and dogs. The verge beneath their bench was now the farm, a stick digging a furrow amongst the litter. Hushed tones as they talked of the planting, the season, the crops that they should be harvesting. A daily event, the rain of Belgrade to them was a good thing for the seeds they had planted, too wet for a harvest. The sun was good for the plumbs in the orchard, September a time for slivovic and jam.Conversations and love of a time and place, now gone for ever in real life, but that was all they had now. Darkness would begin to come and they would help each other from the bench to begin the ascent, after their day on the soil. Two tiny pieces of something precious stranded in the mess of blackness and unnatural disorder.

The people in the flats opposite were ghosts, not in the sense that they were dead but in so far they were dispossessed, desperately unhappy and restless, held fast in the grip of tragic events that had befallen them long ago. Each morning you could see the grandfather make his way slowly, a zimmerframe slalom past the melted litter bins to the bench in the bitter quadrangle between the buildings, the mother staring out at him from the balcony, imprisoned by its security bars, blowing cigarette  smoke to the air, and each evening you could see the kids riding their imitation mountain bikes on the strip of bare mud and grass outside, as the older kids sat listless in the concrete stairwell. Chiefly though, they were ghosts perhaps in the sense that the rest of the living wanted nothing more to do with them. No one called or acknowledged them, and on the street no ones eyes met theirs.

Toast at the launch of Out Of Now, Tehching Hsieh and Adrian Heathfield.
To time
To time past
To the clock
To the watched clock
To the minute hand, hour hand
To the second hand
Against the clock
Against the punch clock
To the heartbeat
To ducking out of time
To running out of time
To marking time
to making time
To time remade
To time remains
To time future
To what art can do
To what it – art – can’t do
To shelter,
Against bars
To walking
To rain
To sleep
To the task
To the rule
To doubt and clarity
To the daydream
To marks on the wall
To art
In its great  strength and its speaking silence
In its persistence
Its visible invisible
In its wit, in its fun, in its blankness
and in its deep articulation
to possibility
to the minimal
in face of capital
in face of commodity
against or in face of the wholesale capitalisation of time
to invention
to touch, no touch and privacy and none
to conversation
to the unsaid, unspoken, unspeakable
to the strength of the solitary
to the little yes and the big no
to the traces that are vanished and the traces that remain
to the ghosts of an actions made in the past but still moving in the present
to the past again
to the future, again
To the now
Which is here
To life and art
To life as art
To art
To go in life
To walk right out of life
To  walk out of what some call life
To survive
to the future, again
To the now
Which is here
And now
To Tehching.

[Photo, as so often: Hugo Glendinning]