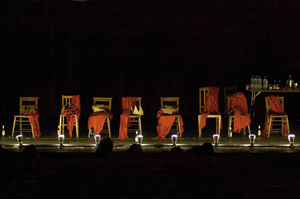 Hugo Glendinning has a re-vamped website with images and texts about his work including collaborations with Martin Creed, Adrian Heathfield, Franko B, Yinka Shonibare, Paola Pivi (and me!). Arriving at Hugo’s place to visit (in the real world) there’s often a moment where we’ll end up at the computer, with Hugo randomly opening folders to show me things that he’s been working on for himself, or with or for different people. From what’s there on his site I’m guessing that the notebook there will be a virtual version of this ‘what’s new’, which is great because he’s always got pretty fascinating projects on the go. Check out the images (as above) from Forced Entertainment‘s durational performance And On The Thousandth Night, the text and series of images of his son Louis sleeping and the many images that he’s been shooting for some Olympics related project, in which kids create dance in East London locations. I’m sure I’ll be linking back and forth to Hugo’s site a lot.

Another new blog/site I’ve been checking out is this one from theatre director and writer David Gale, well known for his work way back leading Lumiere & Son with Hillary Westlake. I really liked this line from David’s recent entry on American identity/Paris Hilton:

“Mythical figures are not people, they generally represent single human characteristics rather than the complex of qualities that comprise flesh and blood persons. We devise mythical figures for the purposes of instruction – they’re not supposed to be something you become”.