A beautiful combination of vagueness and super-concrete detail in Tony White’s great new story at 1001 Nights Cast, Barbara Campbell’s project which I wrote about already here with some thoughts about my own most recent contribution. In Tony’s story Ahead in the Line men whose names you don’t know are telling tales that the narrator can only half-remember as they wait in some kind of line for something that you don’t really get to the bottom of but which you intuit is probably horrible. 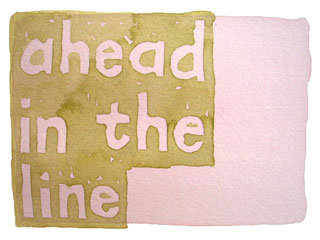 Most of the time you’re filling in narrative blanks, running scenarios in your head about possible contexts/ relationships/contents. All the while you’re addressed as if you were a visitor from far away, for whom common sayings or phrases need  gloss and explanation. Even the narrators voice might best be called enticingly unsteady; oscillating as it does between thick and thin, contemporary and slightly antique. But there’s really more than enough in the constellation of details coming out of the fog, and the constant gaps  in information, for your brain to get to work with.

“There was a funny story too – I can’t remember. Something about a woman and her daughter. I think the daughter was this guy’s niece. Who was telling the story. And this was when those wretches were going from door to door. And they had no respect at all.”

This one reminded me, although it’s very different, of M John Harrison‘s stories for the 1001 project, especially his first, from the prompt Cocking A Snook, in which the narrator seems to overflow with details about a situation, but on the other hand utterly neglects to give any kind of overview. He generalises a lot too, in description, which is beautifully disconcerting – “a man” arrives in his room in a “long house”, “figures in authority” do certain things in the corridor just outside and a radio plays “the local music”, where we can’t possibly know what kind of music that means or what kind of authority these “figures” have over what. Very wonderful and funny and deadpan. Taken together its a picture that’s totally in focus some places but murky and blurred in others. You’re aware of vivid detail, but lack much solid framework to put it in. The world comes out of fog, or emerges through a constellation of points and shadows, or is discovered like a gift only half unwrapped, or an object wrapped hastily and inexpertly in rags – in some places you see precisely what’s there, other places you can only make out forms, shapes and structures that must be guessed at.

“It was impossible to calculate how many rooms there were in the long house. This information was known only to the figures of authority who often squatted in a line along one side of the corridor eating a vegetarian meal.”

What both stories do really well I think is show how it’s the arrangement of words and the gaps between them that create the zone in which meaning can happen.

These stories also celebrate the reader very much, pulling us into the game of language; knowing full well that where there is space, a lack of information, disjuncture, incompletion or anomaly, it’s imagination that thrives. They’re both really enjoyable too – texts where the sense of incompletion doesn’t mean melodramatic puzzles with an old-fashioned ‘mystery’/ denouement but rather structures that are somehow loose and tight at the same time, and which test nicely at the border of what we might be prepared to call a story. For now, in these cases at least, that seems to mean creating a kind of totally gripping situation which also remains somehow ‘only’ a constellation of possibilities, summoned by words, sentences, phrases.

I guess the interesting question might be if or how this kind of approach could be sustained over something longer length. 1001 Nights Cast lends itself very much to the fragment, the almost-a-poem, but if you think ‘novel’ I guess there’s a need (?) to fill more of the gaps, or perhaps, at least, to confirm or deny what’s inside them.