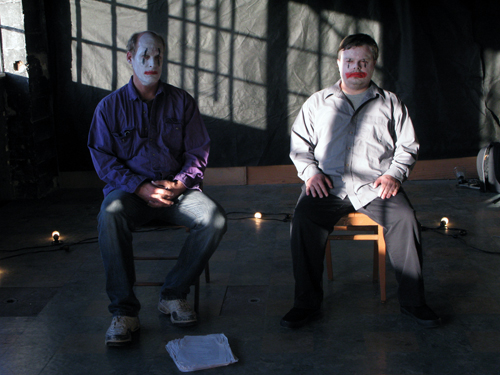 Last week I was with Jim Fletcher and Kent Beeson in Portland for performances at PICA’s wonderful TBA festival curated (for the last time) by Mark Russell. Jim performed the monologue Sight Is The Sense… and Kent joined us for a run at the 6 hour Forced Entertainment  improvised questions and answers performace Quizoola!. Here’s something I was writing yesterday, about one particular part of the latter.

In response to the question ‘Which objects have appeared in your dreams?’ Jim starts with naming a few things, going slowly from gun, houses, cars and rivers, to stairwells, doors, seas. At first I think I am going to cut him off, but I’m tired and so far as I can tell I miss the moment for that. Half a minute later I change tactics, look down to make a joke that I am going to go through the papers looking for more questions as he continues – as if his answer of no interest. Standard tactics. Do that for a while, as he’s still working away on his list. Bit later I look back up from the papers, and watch him – Jim’s eyes focused in middle distance as he continues to talk. I’m smiling a bit as I am watching him I think, enjoying the care and attention and self-absorption he has as he does that, despite the earlier display I made of mock indifference or impatience. There are many moments in the performance of Quizoola! where you try one thing, and then a few seconds or a minute or two later you try something else, a mild kind of ‘cycling the possible responses’, scratching the surface of things, looking for something you can use or work with more substantially. You’re naked in this process – I guess everyone can see that you’re hesitant, unsure. It’s OK. Nothing comes in any case. I watch him, he keeps listing – more objects that have appeared in his dreams. Paper, books, glasses, a mirror, roads, a suitcase. I look out at the people watching. I look out. People seem happy enough listening. It’s a kind of break from the back and forth of the Q&A, doesn’t need the same energy. The room seems very still. I keep thinking that I’m going to stop him. But, looking down at the papers again now I don’t know when to do so, or how and I’m aware that a kind of hole has appeared in the performance. A landmark feature of a negative kind, a black hole. Knives, trees, boats, dogs, bags, tables. He keeps listing. As he goes I’m half listening, but I guess I’m also more or less focused on thinking of ways out of this situation, my mind erratically scratching around in the dust and dirt of the moment, looking for ‘a good idea’, a question to ask – a way out. It’s possible to think of diving in with a question that would scold him for taking so much time and space with this – Do you think people want to know all this stuff? Are you afraid of being boring? – but nothing of that sort seems quite right and I let it pass. Mostly I’m full of inertia, faintly sad in a way, as he’s listing all those banal objects and we’re all sat there listening. Now – with a distance of some days and some thousands of miles – I’m not even quite sure how I stopped him in the end. It wasn’t a put down for sure.. I used that later, a few questions further in, rounding on him for taking so much time with his dreams. But at the end of the listing thing itself I just don’t remember how I stopped Jim and moved on to another question. Strange process of the Quizoola! performance – that you are so focused on the momentary interaction you are trying to make, but so endlessly, so serially, that they start to blur and erase each other. Every moment is a decision or a change moment, part of a flow maybe, something you can intuit for sure, but nonetheless each and every moment is a crossroads, a chance you have to take or not take. – Afterwards, overhelmed by the sheer accumulation of these decisions, so much of what you have done is lost to you, work buried in it’s own dust, ceilings collapsing but you don’t know who’s in there. Later, in the bar you can’t even remember what you did, what you said, what led from one thing to another. It’s gone.