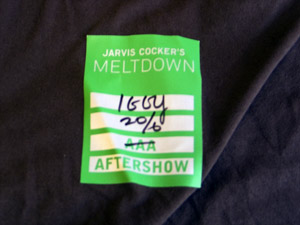 Like you’re looking at a dancer in some cursory form of possession, ghosting temporarily between crucifixions, fashion poses, burlesque hangings, sex moves and semi-obscene gyrations, beckonings, crowd-tauntings, whiplash car-crash jerks, yells, rabble rousings, self-abuses, fragments of bar-fights, air guitar and fist-swinging street confrontations all played thru some kind of almost comically hyped-up full-on rocker lens. Or you’re looking at an exuberant grotesque, part-clown part-reptile – death-denying or death taunting and in any case, somehow in a state of avoidance concerning the fact that this body  is 60, the face like an astonished and jubilant skull that has just watched its own reconstruction thru surgery.

Lean like a 20 year old, skinny like a cartoon stick man, all ribs, bare bones and muscle. At the same time tho he is nonetheless and evidently decaying; the tanned skin not-taut, the walk awkward, the teeth too vivid/unreal. He sings, yelps and shifts from catwalk-posturing to gym-honed show-boating, giving off an air of the borderline psychotic and then somehow just looking funny again. Possessed of apparently boundless nihilism, boundless joy, boundless testosterone-arrogance, revelling in the gaze of around 1,000 people but at the same time demeaned and degraded, self-demeaning, self-degraded. What you’re looking at, mouth open, jaw dropped, is a body surrounded by, at the very centre of, in the absolute eye, and the eventual cause of the wall, storm and rush of brilliant noise that fills the room. A body that crackles with its own internal electricity, burns bright in its own private logic, burns so very very bright in fact that it seems as tho it might be determined to burn out. It’s a body that by simple virtue of being here is already celebrating its own survival, rushing and flickering with its own continued vivacity and velocity, delighting in its capacity to perform, provoke and please. But what it returns to, most often and with most glee, again and again, is its ability to conjure, or to conjure with, its own destruction.

You can lose yourself in what is happening. And it’s hard not to be amazed.

I guess what struck me most was how much the event hung between a very well calculated rock-gig dramaturgy (precise, concise, absurdly effective) and the simple fact of Iggy inside it – a presence as simply synpatic, muscular, and electrical as it might be human. The event then as this meeting between some very good planning/theatre and something quite other, quite beyond, something bordering on the shamanic.

Linked to this is the fact that you cant very well see what you’re watching ‘just for the gig’ – that watching this 90 minutes you’re also always at the same time feeling the weight of the life behind it; the 40 plus years of this behaviour, theatricalised excess and genuine self abuse. You’re watching the life in fact, through the window of the show; the fact of his survival to this point, the history (real and imagined) that’s marked and contained in his presence. Like time wells up, is dragged up tangibly inside the auditorium, shimmers and flickers, made present at exactly the same moment that it is denied.