Following yesterday’s post my friend D sent a link to a clip showing Godard’s contribution to the Wim Wender’s 1982 documentary Room 666. Godard rambles in fine form, talking about the future of cinema and other things, wrong on some ideas (small things and small countries will disappear) cryptic for the most part, and right (so far as I can tell) on others.

Television is nothing to be afraid of… he says. It’s so small and you have to be very close to the picture. In the cinema, on the other hand, the picture is large and intimidating and you watch it from a distance. Today it seems people would rather look at a small picture close up than a large one from a distance.

Hard to calculate the ironies or otherwise of watching this fragment on youTube where the movie itself is cut up and stripped to its bones, distribution is all the time and everywhere (I mean that with some irony), and the picture got even smaller. 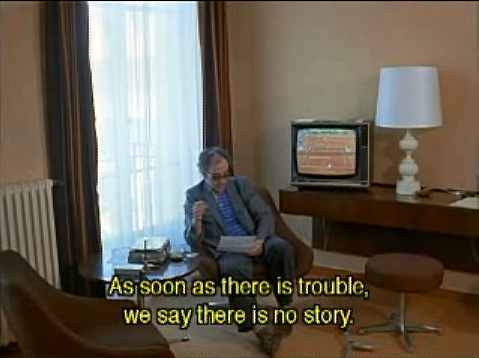